An Amazing Lodge in the Belize Rainforest

Couples that wander together, stay together…right? Okay, that’s a bit of a stretch, but there’s no doubt wandering is a fabulous way to celebrate an anniversary. My husband and I had survived 15 years, the birth of two children, and the construction of both a business and our dream house. We deserved an out-of-the-box off-the-beaten-path adventure, so we were headed to the Belize Rainforest.

Why the Belize Rainforest?

This was the perfect opportunity to test out my favorite Christmas gift—1,000 Places to See Before You Die! I flipped through hundreds of pages…the Great Wall of China, the castles of Germany, an African safari, the rainforest? I read, I pondered, I queried, I discussed, I re-read, I consulted, and then I decided. Since it’s under the imminent threat of humanity, the rainforest it would be.

Only because of the wild success of the book was I able to completely relinquish control of our wander to Patricia Schultz as we headed for what I knew as the “Land of Drug Lords and Police Who Looked the Other Way.” I bypassed Google and followed Patricia’s every suggestion, which resulted in the purchase of two plane tickets (to Belize and Costa Rica), a reservation for two bungalows and one tent at three different rainforest resorts, and reservations on four hopper flights in order to minimize our time spent on the infamous Central American roads. Rainforest gear was ordered, Grandma was imported, and we set off on a legitimate exotic adventure. First stop—Chan Chich Lodge in the Belize rainforest.

As we skidded into Philip Goldson International Airport in Belize City at 11:00 a.m. on a stunning April day, my first thought was, “I’m alive!!!” I’d been advised to steer clear of the city with the highest murder rate in the country and I fully intended to comply. I was overcome with relief when I spied our misspelled names on a piece of wrinkled piece of paper clutched in the hands of guy wearing a big smile and a t-shirt with the name of our airline, Javier’s Flying Service. Was this Javier? Whoever he was, was he a good pilot? 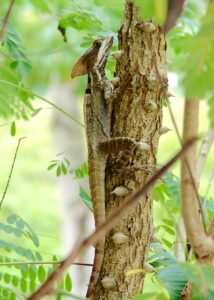 “Hola, mis amigos!” He was not Javier, but Daniel…a native Belizean who would be our private pilot for the short flight to the rainforest. It was immediately clear that he was accustomed to boosting the confidence of skittish tourists as he bragged of his 30 crash-less years during the short stroll to the plane. He would be shuttling us to Chan Chich Lodge, a rainforest resort tucked away in the middle of an ecological preserve.

After sharing his encouraging track record, Daniel brought us up to speed on his other passion: the socio-economic situation in Belize. It’s quite sad. The younger generation of Belize, including his own two sons, are wooed by America’s “promise” of money and housefuls of material possessions. He expressed his hope that the U.S. would follow through on their threats to secure the border in order to give his tiny country a fighting chance. We stopped abruptly. When I looked up, every nerve of my body went into a tail spin. I was standing in front of the teeniest plane in the whole damn airport…possibly the world as I don’t believe it’s possible to make them any smaller. It was time to face one of my worst fears…dying in a fiery plane crash. I wondered whether we would make it to our 16th anniversary. If we did, it’s quite possible my head will still be buried in my barf bag.

Yes, that’s right. On top of a paralyzing fear, I had the horrible curse of debilitating motion sickness. The last [and only] time I flew in a teensy plane was 15 years earlier on my honeymoon, from Papeete, Tahiti, to the island of Moorea. It was then that I learned the value of a simple white plastic-lined bag. My soul is still scarred by my feeble attempt to contain semi-solid liquid within my hands until the plane landed and I was allowed to fling it to the runway. Daniel had no idea what was coming when he invited me into the front seat, where I would be refreshed by flowing air and an unobstructed view of the horizon. I climbed in, clutching my bag, to a seat with less leg room than my two seater car back home. They weren’t bullshitting when they told us to pack light due to limited cargo space on the planes.

“Just relax and don’t think about it. You’ll be fine,” said the husband with an iron stomach and a bad memory.

I give Daniel credit for his valiant effort to distract me with his professional tour guide tactics. I heard a few words…Mennonite, Mayan, mangroves. After 15 minutes, he stopped talking to me. After 45 minutes, I’d used the bag twice and no longer feared dying. Death was preferable to my current state. When I climbed out of the plane, the only positive was the sense of vindication I felt when I looked back and saw the only other passenger with his head buried inside his very own white bag. As my feet hit solid ground, I tried to focus on gratitude rather than the three remaining flights.

“Welcome to Chan Chich!,” beamed a young guy standing by a white van. “I’m sorry to rush you, but we must get you to the dining room before they stop serving lunch. There will be no more food available until 6 p.m.”

Good God, just the thought of food made me salivate…for all the wrong reasons.

Ten minutes later, we were jointly welcomed and ushered to our table in the “dining room”…a raised covered platform in the middle of the resort. My stomach rebelled against the grilled grouper, sautéed vegetables, and rice that lay before me. I have Lissette’s Secret Sauce (made at Gallon Jug Farm) to thank for the ability to get that food into my belly.

On the way to our bungalow, we were assaulted. First, by a symphony of birds. More than 300 species within 360 degrees, we were told. The most obvious were the oscillated turkeys, with faces covered in bright orange facial warts scurrying all around us, and the Montezuma oropendulas, who were the architects of the scrotum-like nests hanging from every tree. Next, by the chill inducing [and way too close for comfort] guttural roars. We were assured that this sound was not emanating from big cats lurking in the trees just behind us, but from howler monkeys that were perched in the forest canopy many miles away. 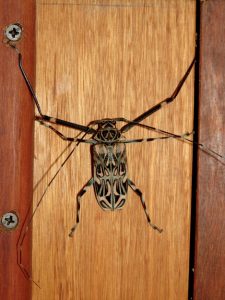 The resort consisted of 12 thatched, screened and hammocked bungalows surrounded by 350,000 acres of rain forest preserve, un-excavated Mayan ruins and a pristine working farm. Word has it the property is the private sanctuary of a Coca Cola executive who visits it often. My favorite feature was the lack of a crowd…and, shrieking children.

Remember the giddy excitement of a childhood treasure hunt? Well, the nine miles of trails surrounding Chan Chich are bursting with riches. Viewing wildlife takes almost no effort at all. Just wander around the grounds and, sensing your presence, basilisk lizards will pop up on their hind legs and run like hell in the opposite direction. Snakes will fall from trees and ginormous insects, including the very aptly named harlequin beetle and peanut bug, will show themselves to you if you look carefully. But, exploring the nine miles of trails surrounding the lodge on your own or with a guide is a MUST. A guided night walk might reward you with a humongous forest scorpion, a giant cane toad, a formidable looking red rumped tarantula, and maybe even a small crocodile.

At first, the knowledge of the local guides and the extra sets of eyes that come on these guided excursions are priceless. But, the solitary daytime walks were the most enriching for me. Our first couple solo excursions into the forest were flops. Not even a run-of-the-mill bug. Upon our return, we would be flabbergasted and frustrated to see the growing list of sightings on the chalkboard in the guide hut. A counseling session with a guide taught me to hone my primal rainforest senses. It’s a spiritual experience requiring total presence in the now, patient stillness, and attention to every rustle, falling leaf, and snapping twig.

We set out on the afternoon of our second day determined to write on that chalkboard. As the trees engulfed us, we stopped talking. One, two, three steps…stop. Listen. Four, five, six steps…be still. Seven, eight, nine…pay attention. A leaf wafts down through a beam of sunlight. This time I didn’t ignore it. I slowly looked up and studied the top of the trees. Searching for the infamous howler. Another rustle…another leaf…then another. I kept scanning the canopy until I heard a noise to my left.

“Hun, do…not…move,” I whispered to my husband. “Look to your right…on the lowest branch.”

A diaper would have been helpful right about now. Less than 25 feet away, a very large howler monkey was tentatively creeping down a branch directly toward us. My eyes locked with his. Oh God, this was beyond intense. A barrage of thoughts whizzed through my head…I am not in a zoo, I am not in a zoo, I am not in a zoo. They’re a hell of a lot bigger than I expected. Is this whole eye contact thing going to drive him berserk??? I was simultaneously thrilled and petrified…my insides liquefying. So much for self preservation. Paralysis had set in. I felt such a sense of wonder as this [clearly] intelligent soul continued to stare directly into my eyes. A strange peace flowed through me. Suddenly, he stopped and took a seat…and, I took a breath. Feigning distraction, he began to pick bugs out of his fur, glancing furtively at me as he nibbled them off his fingers. When he looked away, I looked up. Wonders weren’t ceasing. I see his pod. They must have quietly sneaked into view while their patriarch had my unwavering attention. There were at least six more howlers…the older ones lounging in prone positions on branches with their legs leisurely swinging back and forth, the younger ones leaping from branch to branch in hot pursuit of each other. All of them checking us out.

I was overcome with emotion…this is what it feels like to be truly alive. I looked back at the male and whispered my gratitude for this gift. I knew I would never be the same. I could have stayed there for hours, hanging with howlers. But, I felt my husband’s impatience, so we walked deeper into the forest.

Our days became blurs filled with mouth watering local specialties for breakfast, lunch and dinner [all doused with Lisette’s], endless reading and countless siestas ensconced in our personal hammocks, enriching treasure hunts in the forest, and several more visits to the chalkboard. Such a contrast this place was…a peaceful, yet stimulating, utopia. Despite missing out on the elusive jaguar and poisonous fur de lance, I was beyond satisfied. After all, how many people on earth are blessed by an intimate moment with a monkey?

Chan Chich Lodge in the Belize rainforest offered us the perfect balance of exotic adventure and desperately needed relaxation. Although we were thrilled to be temporarily childless on this trip, we hope to bring our two kids back someday for a family adventure.

TRAVEL THERAPY #3: Passion if Not a Dirty Word

Get more tips on visiting Belize gathered over my many future wanders: 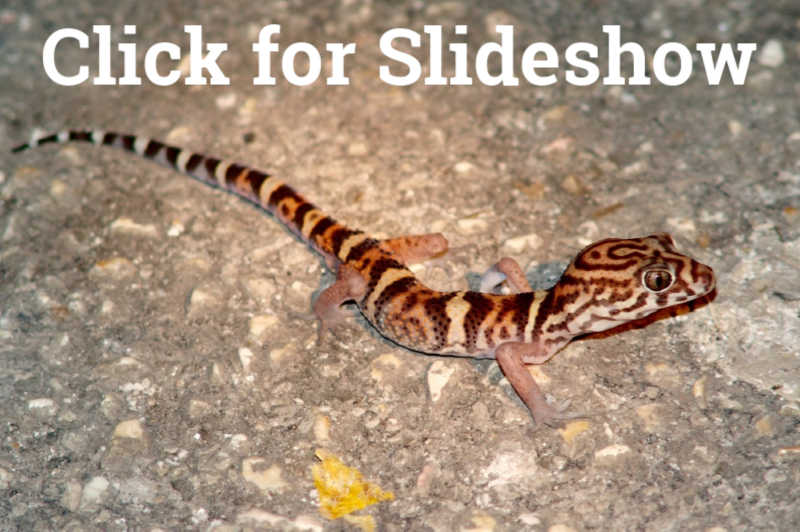