Friends Are The Family You Choose

Corsica is to France what Sicily is to Italy. Nothing like mainland France, this tiny rugged island has a huge feisty spirit and sits at the top of my list of wanders. It’s definitely a place to completely disconnect and experience life as it used to be so very long ago. This post contains some helpful Corsica travel tips (and history) to make your wander to this unique island the best it can be.

Corsica doesn’t come up in very many conversations in my teensy suburban corner of the Universe. In fact, this would be a rare occasion where I’m pretty safe using the word “never.” So, how did I come to wander to this rugged island off the coast of France?

It’s a long and beautiful story that began nine years ago when two French girls came to San Diego as exchange students. The shorter version is that we adopted each other as sisters. Over the past decade, the connection to my French sisters has deepened and has brought me a brother-in-law.

In the past, I’d often suspected a sleep-deprived nurse or a secret adoption that managed to mismatch me with my biological family. All I know for certain is that with my French one, I feel completely at home. And, I was ecstatic to be included in the annual family sojourn to Corsica. 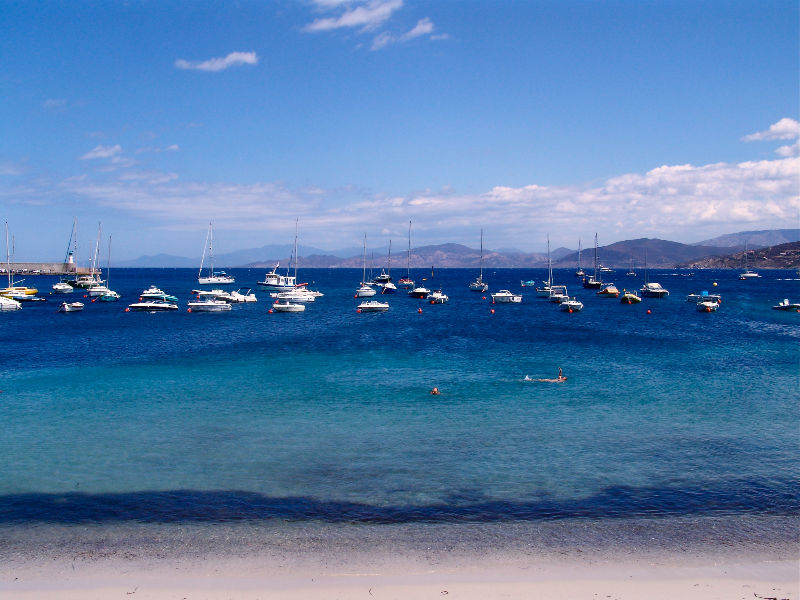 Two years of separation is my max. It’s hard to believe it was just two years ago that I stood (shaking) at a podium in the front of wedding guests in the medieval cathedral where Vanessa and Baptiste were married. (It’s a testament to my love for them that I did a reading in honor of their union…in French. Did I mention I don’t speak more than five words of French?) When they extended an invitation for me to join them on their family holiday and snuggle with my newest nephew, it took me all of two seconds to mull it over. And, a couple hours to get an education.

Corsica is one of three Mediterranean islands – along with Sardinia and Sicily – to have been reluctantly absorbed by a larger country. The indigenous population of all three islands remains fiercely loyal to their own cultural identity. And, let’s just say, subtlety is most definitely not the Corsican way.

Corsica’s emblem is the “maure,” a profile of a defiant sash-wearing Moorish male. Symbolic of a struggle for independence, you’ll find it on the Corsican coat of arms, their flag, road signs, beverage containers, clothing…pretty much everywhere you look. (Coincidentally, you’ll even find it on the Sardinian flag.) The sign welcoming visitors to each town has two names: the French and the Corsican. The French one will often be obliterated by bullet holes or covered in spray paint, while the Corsican one remains mysteriously and perfectly legible. Any outsiders who didn’t get their new construction pre-approved by the locals in charge are likely to watch their property burn to the ground in the middle of the night. Countless Corsican firemen fight hard to protect the surrounding Corsican-owned properties, but don’t always manage to save the foreign one. Hence, you’ll not find a McDonalds on Corsica…nor high-rise buildings, nor manicured golf courses, nor hordes of tourists. In fact, not much of anything from the modern world. Corsica is a breath of pleasantly outdated air.

Nature, not artifact, is the prime attraction of the island. The landscape is analogous to the spirit of the people…rugged, untamed and domineering at times. The vivid sea collides with a rocky coastline peppered with small white sand beaches. As you head inland, sage green flowering scrub [known as ‘le maquis’] and squat trees [dominated by olive] thrive among the jagged auburn rocks. Narrow windy roads cut through the mountainous interior providing access to a smattering of old-world villages. 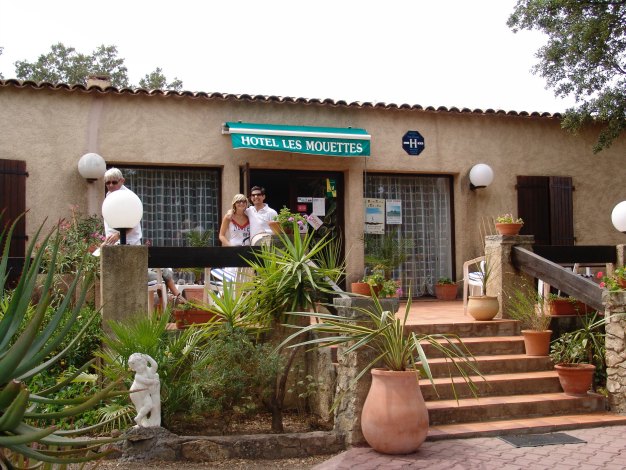 We were all ravenous when our plane hit the runway. Ahhh, what utter joy to be back in the land of ‘moule’ (mussels) and ‘frite’ (the slender French version of fries). In the seaside village of St. Florent | San Fiurenzu, they were presented in bowls the size of small washtubs that were filled to the rim with a savory broth for soaking the frites.

Our home base for the next five nights was near the town of L’Ile Rousse | Isula Rossa, in a small two-star family-style auberge called Hotel Les Mouettes (“The Seagulls”). Here ‘family-style’ is not an cliché, but a caveat. The owner’s living room – complete with couch, love seat and TV – kitchen and dining area were smack in the middle of the reception area. The guest rooms lined the long hallway off the living room. The serene garden and refreshing pool were for all to enjoy.

That first glorious afternoon was spent bonding with my two month old nephling, perturbing his terribly two-ish cousin, and catching up with family. Le gran finale of the day was a traditional Corsican dinner at Auberge de Tesa that restored my lost faith in Corsican cuisine. (The loss had occurred several years earlier in Cannes when our bravery went too far causing us to order the Corsican specialty known as “duble figatelli,” a double order of grilled salami, and culminated in us celebrating Bastille Day with our own kind of fireworks…in “le shiott.”) While sipping sparkling peach aperitifs, we spread a variety of tapenades on soft warm bread. None of us felt the need to know the ingredients of the hearty stew that followed. It was enough to naïvely savor the complex blend of unique flavors. The main entrée was one of my favorite French delicacies—magret de canard (fatty duck), which ironically doesn’t have an ounce of fat on it. Our dessert was a trio of Corsican fromage and fresh fruit served with the darkest and most delicious chocolate fondant.

The next day a soft knock on my door jolted me from the abyss of sleep. Would I care to join the family in town for lunch? I was mortified as I knew the French eat lunch far past noon. Clearly, my internal clock had completely shut down and a robust French espresso was in order. I sipped with a smile under the trees on L’Ile Rousse’s picturesque plaza while listening to the flamenco guitar duo.

The Corsicans submit to nothing…not even my good weather karma. That afternoon a wind with an attitude began to blow. While the watercraft sped for the shore, the sunbathers dug into the sand, refusing to relinquish a single ray of sun. We all thought it a fabulous time to run for the hills. As we climbed in elevation, we became chilled. Not by the temperature, but by the macabre roadside attraction – rows of bristly porcine hides with desiccated tusked heads straddling the barbed wire fences much of the way up the mountain. These former wild boar, known as sanglier, begged the question…was this merely the most convenient place to dehydrate them or were they there to serve as a “subtle” warning? As we drove on, Baptiste pointed out another odd tradition…the fiercely independent Corsicans shirk public cemetaries and bury their dead in their own yards. 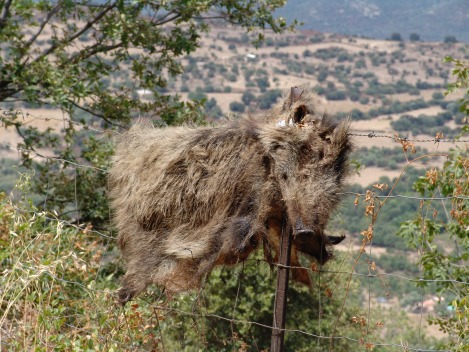 We passed the quaint villages of Belgude and Pigna, finally stopping for lunch in St. Antonine at the typical European lunch hour of 3:30 p.m. This feast began with fresh squeezed grapefruit juice followed by chèvre salad sprinkled with (sanglier?) bacon and dried figs. Next was charcuterie with an assortment of Corsican (Sanglier?) saucisson, including UN-grilled figatelli. (Note to Self: Graciously decline any form of figatelli from this day forward.) The last course was a scrumptiously simple chataigne (chestnut) cake.

That evening in Calvi is fodder for one of the stories I shall someday share with my grandkids from my future rocking chair. After an unforgettable seafood dinner on the sand, we headed to the infamous Tao, a piano bar tucked inside one of the city’s historic citadels. As we excused our way through a thick and crowded cloud of smoke, six seats materialized directly in front of the piano. For as long as we could stand the smoke (about two hours), we watched none other than Tao himself belt out a mix of traditional French and modern tunes, seasoned with a lusty dose of improvisation. Intoxicated by good feelings and even better booze, the crowd enthusiastically joined in. One of my favorite aspects of French culture is the much smaller gap between generations as a result of the perpetually youthful hearts of the old and the sentient souls of the young.

At sunset the next day, two moistened male fingers held overhead determined there was a definite lull in the wind and an immediate jet ski excursion was pursued. I was reassured that my lack of a bathing suit mattered not and it was suggested that I simply strip down to my bra and panties. (Thank God, I wore some cute ones today!) As I climbed aboard Baptiste’s jet ski, I glanced over at Vanessa. Why was she removing her sunglasses and wedding ring? As she locked her arms around her brother-in-law, she looked at me and mouthed three words: “I’m…SO…sorry.” As my neck suddenly jolted backward and we literally began to fly over the water, I understood. Funny how priorities shift at times like this. The fate of my pricey new sunglasses and clothing didn’t even register on my radar. I just wanted to live to see my children again.

On our last night, very much alive but wiped out, we opted for an early dinner…at 10 p.m. The next day I kissed my adopted family goodbye. Although I don’t get to place a prized check mark next to “Corsican Calanque” in my personal copy of 1000 Places to See Before You Die, I did scratch enough of Corsica’s surface to appreciate its proud spirit and well preserved old-world culture AND pass along some helpful Corsica travel tips to fellow wanderers. 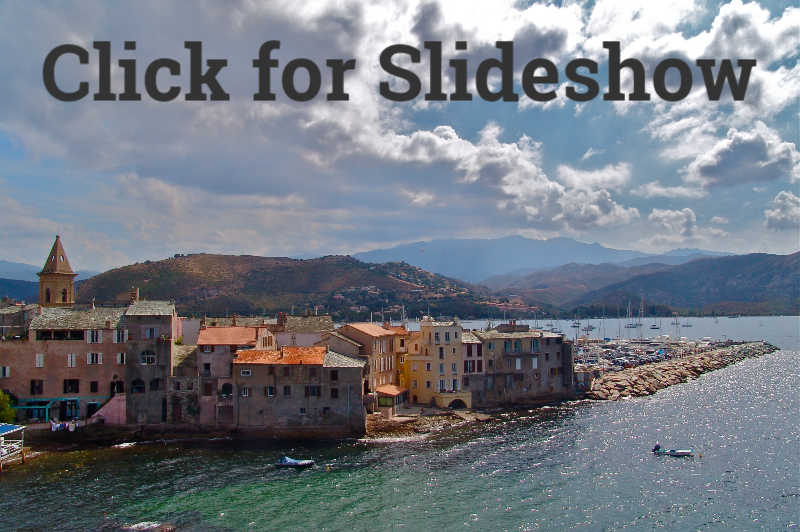