I snuggled deep into the down comforter. I was soaring. (Little did I know I would soon be researching for some jet lag tips to preserve my sanity.)

I arrived in Germany today—six weeks after returning home from my last trip to see my boyfriend. This evening we sipped on piping hot Glühwein at Ingolstadt’s quaint Christkindlmarkt and walked around the colorful Alstadt while snowflakes floated in the icy air.

Winter is my hands down FAVORITE season in Germany. And, now I’m tired! Really tired. Thank God, because it’s 1:30 a.m.—a bit too late for a weeknight, but I can get by on 6-7 hours sleep.

What was that? Oh, wow…German heaters make some seriously bizarre noises. Okay, I can ignore that. Because I’m tired. I really am. I’ll just turn over on my side…

Awwww, he’s so cute when he’s asleep—even if he does snore a tiny bit. Maybe just a gentle smooch on his ear will make him stop so I can sleep. That’s better!

Well, it sure would be nice if they could figure out a way to silence those chiming clocks between midnight and 8 a.m. Two o’clock??? Wow, that was the fastest 30 minutes EVER. It’s okay…I can still make it on 5-6 hours, but it’s getting serious.

Must…relax. Thinking about relaxing, I’m going to start doing more yoga. But, that means I’ll have to get up earlier…

You’d think that after a year going back and forth between California and Germany, I’d have jet lag nailed. Not only have I not become a pro at resetting my internal clock, my clock is completely shot.

It’s time to take the pillow by the corners and do some Google reconnaissance so I have an understanding and a plan.

Why the Jet Lag? 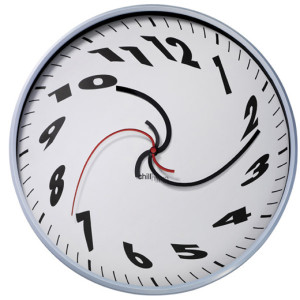 According to Medicine.net, jet lag—or “desynchronosis”—is “a temporary disorder that causes fatigue, insomnia, and other symptoms as a result of air travel across time zones. It is a circadian rhythm sleep disorder—a disruption of the internal body clock.” In short, the hypothalamus gets off kilter and is unable to regulate melatonin properly, thus all those awful symptoms kick in.

One of my suspicions was correct. “Descynchronization” is directionally selective. If you’re traveling from north to south [or vice versa], no problem. From east to west, you get a temporary gift that you’ll be forced to give back when you return home.

Yep, it’s west to east that’s the nightmare. And, the more time zones you cross, the more scary the nightmare. Word has it that it can take one day per time zone for your circadian rhythm to get back the beat. This means that on a journey from the U.S. to Europe, a “normal” person can expect to recover their lost hours in three to five days.

Once again, I’m far from normal. On the aforementioned trip, it took me 17 days to resynchronize.

Obviously, these tips are only worth following if you’ll be staying put in the “foreign” time zone for more than a few days. If you’re taking a quick trip or there’s not much of a time difference between your home and destination, keep it simple and just stick with your domestic time. 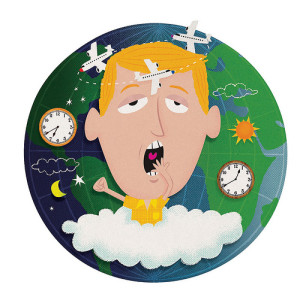 On this trip, I vowed to faithfully follow my jet lag tips, which is why my cosmetic bag was fully stocked with:

I followed EVERY one of my pre-trip jet lag tips listed above. I popped my first melatonin at 3 p.m. in Atlanta [11 p.m. in Germany] and, before I climbed in bed that night, the Benadryl was already dissolving in my stomach. I was feeling optimistic.

I faithfully followed this routine for the next four nights—and, each of those four nights I was graced with beautiful, luxurious, uninterrupted sleep. It still took every ounce of resolve to drag my groggy self out of bed each morning, but I managed to make it to the kitchen before noon to sip on some rhubarb vanilla HERBAL tea. I do believe I’ve synchronized…and, it’s never felt so good.

P.S. I’m SO going to try this Entrain on my next international wander!