In the summer of 2011, I somehow convinced my almost 13-year old daughter to embark on a 50-day road trip in search of adventure, fun, and coming-of-age wisdom from women around the country. To get her to agree to leave her bosom buddies for an eternity, I was bound to one term—“There shall be NO learning in the summer.” I agreed…with my fingers crossed behind my back. I knew that we would both learn invaluable lessons on this trip whether we liked it or not! We launched our Retro Advice Road Trip from San Diego and cruised the highways and byways around the perimeter of the U.S.—until Day 45 in Seattle, when my girl ran out of gas.  This is the story of one of our stops — one day in Las Cruces and White Sands National Monument.

It was Day 2 of our 50 day-road trip and we were getting out of Phoenix as quickly as possible. As my pre-teen girl sat on her suitcase in the hopes of closing it, the amusement started.

I swear this thing is growing every day.

My mirth continued as she dragged it to the car in the rapidly rising desert temps.

How do cars not melt in this weather???

Not long after merging onto I-10, the boredom complaints began. “Read one of your books,” was my (ridiculous) suggestion.

I bet I can get through this entire trip without reading ONE book.

So far, so good. Her next comment showed why she should. A few hours down the highway, I pondered out loud—”I wonder if we’ll know when we’ve left Arizona and entered New Mexico.”

“Ummmm, ye-ah…we’ll know because the signs will be in Mexican, Mom. Duh.”

When I laughed so hard I snorted, she giggled…“I mean Spanish!”

When I explained to her that NEW Mexico is one of the 50 states in our very own English-speaking country, she huffed…

My plan to educate my daughter in summer was hatching early. And, my theory that travel is a legitimate (and sneaky) form of education has already been proven.

Six hours after leaving Phoenix, we found Las Cruces. I’m not going to sugarcoat it—we found it to be lacking. It was downright sad. It became clear why it had been so difficult to find a unique (non-chain) place to stay here. The recession had hit this area hard, forcing many of the little guys out of business.

After dead silence in response to nearly every email or phone call I made in search of independent local accommodations, I finally found our place. 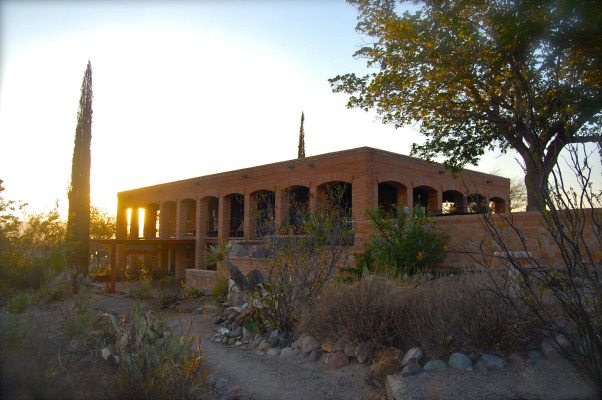 Perched atop a hill at the end of a long washboard road, Hilltop Hacienda was a middle-aged brick hacienda with sweeping views of pastel colored mountains and lovingly tended, although temporarily frost damaged, gardens.

Our hosts, Bob and Teddi, showed us to our bedroom, which came with a slightly creepy doll collection that had my girl a bit wary, and took us on a tour of the common areas. Between the TV-endowed living room, tiny Southwestern-style dining room, functional 1970’s kitchen, and various outside nooks and crannies, there were plenty of places to relax.

The next mornings breakfast was served on the back patio—German “Dutch Babies” smothered in fresh berries and bacon were piled high on our plates. We bonded with our inn-mates and avid hikers, Troy and Dyan from Pennsylvania. I both listened to Troy share their plans to go on an all-day hike and and do some “trail running” on this 100+ F day and watched my daughter unable to hide her total astonishment.

It felt like we were hanging out with long lost cousins at Grandma and Grandpa’s—and, we weren’t going anywhere until we cleaned our plates. I’ve never seen my girl eat so much. I tried, but it was clear I had disappointed our host.

The second everyone had left the table, my daughter turned to me and whispered…

Hiking…in this heat??? Who does that??? Hey…let’s go bathe in our own sweat! And, he likes to RUN up mountains??? When I’m dating, the first question I’m going to ask is ‘Do you like to hike?’

The itinerary for our one full day here included a visit to historic Old Mesilla, quite unfortunately during the hottest part of the day. (Did I mention that it was one degree short of sweltering here?) Fortunately, we would be cooling down later at White Sands National Monument, where we would watch the sun set and the moon rise below and above the dunes. 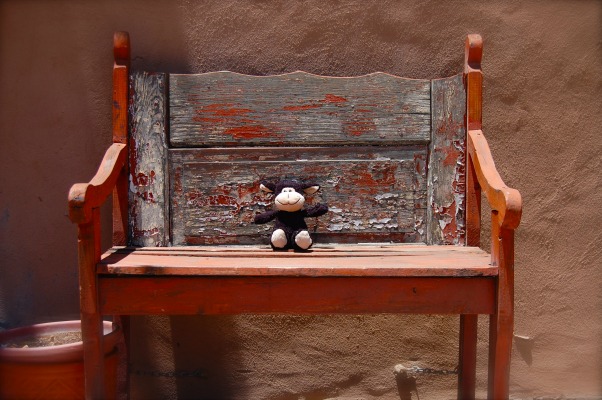 I was sure I had taken a wrong turn somewhere, but the store clerk assured me that we were smack in the heart of Old Mesilla. Let’s just say they have mastered the whole ghost town thing. Going into the stores was bordering on uncomfortable due to an air of desperation to turn over the shelves of tourist trinkets.

For some reason, I was optimistic about lunch at La Posta de Mesilla, a quaint Mexican café situated on the town plaza. The toucan in the lobby was a nice touch. Unfortunately, our meals were not.

We were too hot to search for charm in this town, so we opted for a siesta back at the hacienda before heading out to the dunes.

White Sands National Monument was an entirely different story. It was breathtaking, mind boggling…and, so much fun!

The blinding white dunes seemed to go on forever. The only reason we knew we were not looking at snow was because it wouldn’t have lasted a millisecond in the scorching heat.

I’m sweating between my boobs! How disgusting…that has NEVER happened before.

Fortunately, the temperature dropped as the clock ticked on…until it was downright pleasant.

If I could have remembered who recommended we bring snow saucers, I would have gone out of my way to thank them. I did thank our adopted grandparents for sending us with some WD40. Dune sliding was a blast.

This place can make even the most amateur of photographers appear wildly gifted. The day we were there, the sunset was amplified by the smoke from a massive wildfire. Arizona’s tragedy created a stunning backdrop of purple, pink, orange and blue layers and swirls for our sunset photos. 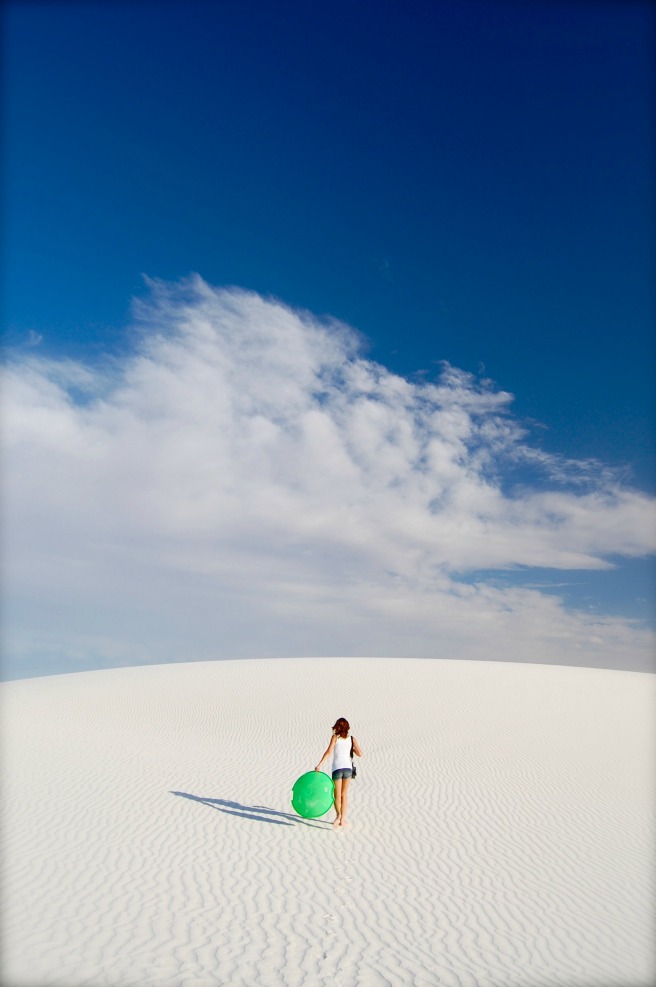 As the sun went down, the moon rose, turning the sand into billions of sparkling crystals.

I was so overcome by what I had just seen that it wasn’t until about 10 minutes after we began driving toward the exit that I realized my feet were bare. My favorite pair of flip-flops were lying somewhere at the bottom of a dune…and, I couldn’t bear to leave them.

Good karma struck. Not only we find them at the first place we checked, but we almost (literally) ran smack into our “cousins.”

Troy was full of smiles…and, an idea. “Did you guys do any dune jumping yet?”

He was met with blank stares. “Follow me,” he said.

Five minutes later, we were running at full speed and leaping off the edge of a dune. It was the closest either of us had ever come to flying.

Given our lunchtime experience at an indie restaurant, I compromised on my “No Chains” rule and told my girl we were heading to Ruby Tuesday for a burger on the way back to the hacienda. She was excited, but doubtful.

“But, it’s not Tuesday…can we still go?”

The girl had me laughing all the way to Austin, Texas.

“New Mexico was a lot like Arizona, both weather and activity-wise. The whole time the temperature was between the 90’s and 100’s. My brain was almost baked.

Our first morning we awoke to a wonderful breakfast. We talked to the owner (Bob) and he recommended a cute little historic town called Mesilla. He said it was “very worthwhile,” so we jumped in the car and went to find it. We eventually pulled up to a little town that almost looked deserted. We weren’t even sure if we had reached our destination, but we had.

We roamed around this tiny town and popped into a few stores. There wasn’t much to it…a church, a restaurant, and a few stores here and there. In the 100+ degree weather, the heat drained us. Bob had also recommended a restaurant called La Posta. We searched for it, then realized it had been right in front of our faces the whole time…not a good sign. We followed some women who knew where the door was. It did not have the appearance of a typical restaurant…we were welcomed by some friendly birds including a macaw and a toucan! We were seated and got our lunch…and, let’s just say I enjoy my tamales softer and my salad without water.

After being in the scorching sun for such a long time, my mom and I were exhausted. We took a (much needed) relaxing afternoon rest.

At about 5 p.m., we headed over to the White Sands National Monument. It was absolutely breathtaking. The sand was stunningly bright. The dunes went on for miles…you could see no end to the glory. They had perfect slants that you could sled down and perfect hills for relaxing. The sunset was definitely worth the wait. The clouds reflected colors of pink, orange, yellow, red, purple, and more. I have to say, in the beginning I was definitely iffy about New Mexico, but White Sands National Monument turned me around. And, Las Cruces is a pretty city…when it’s dark outside.”