I’m thrilled to be back in the Big Apple again—this time for a New York City food tour with my girlfriend (and without my husband and kids…woo hoo!).

This city is a mecca for foodies, which brings my inner glutton out to celebrate.

“Gluttony, derived from the Latin ‘gluttire’ meaning to gulp down or swallow, means over-indulgence and over-consumption of food, drink, or intoxicants to the point of waste. I Gluttony is not universally considered a sin; depending on the culture, it can be seen as either a vice or a sign of status.” | WIKIPEDIA

I don’t look at my gluttony for food as a vice or a sign of status—it’s merely a facet of my intense curiosity and passionate desire for experiences.

I scored a red eye flight from San Diego to John F. Kennedy Airport for only $250. I barely remember buckling my seat belt when I was jolted into consciousness by the crew telling us to raise our seats back up in preparation for landing at JFK. It was 7:45 a.m. in NYC…4:45 a.m. in my brain. Oh, boy.

We stored our bags at our Midtown Hotel and immediately went in search of breakfast.

Cer-té is a caterer first, a restaurant second. There may not be anyone available to seat you as they may be busy assembling the day’s catering orders on one or more of the tables you’d like to be sitting at. On this morning, this didn’t even phase us. I was so famished, it didn’t even phase me much when they brought the wrong tea, confused turkey bacon with turkey sausage, and forgot the raspberry purée for my blintzes. When I finally got all the right stuff, it was really, really good. It’s good to be famished if you’re coming here for a sit down meal. I bet they totally nail their catering.

Our next stop was Greenwich Village for a Foods of New York Tour. We met our tour guide in front of Murray’s Cheese and commenced eating.

The tour menu was extensive and delicious:

If you do this tour, arrive hungry and skip the big dinner plans. We picked up some marinated artichoke hearts and an Italian treat made from bread, sweet soppressata, sun-dried tomatoes, basil and fresh mozzarella and carried it lovingly back to our room.

When we walked through the front door of Europa Café on 55th Street, I immediately smelled a chain. The menus confirmed it. There are a total of 12 of them throughout the city. I ordered a prosciutto and fresh mozzarella panini and…quickly forgot about it.

After a short shopping excursion, I went in search of a special tea house not far from the hotel.

Radiance Tea House & Books may look unassuming on the outside, but it’s magical inside. The ambiance of this one-quarter boutique/one-quarter bookstore/one-half restaurant is mostly soothing with a touch of intrigue.

I was greeted immediately when I walked in the door and was ushered to a small table where I was given a guided tour of the extensive tea menus. Yes, that’s plural—there’s one menu for iced teas, one for medicinal/herbal teas, and one for traditional white, green, black and oolong teas. I had landed in Heaven. My server steered me toward a naturally sweet oolong tea called Osmanthus. I also took his suggestion on the steamed chicken and wood ear mushroom dumplings and a chicken soup touted as “beneficial for one’s health.”

I don’t think I’ve ever had a tea that was more perfectly brewed. If you have never tasted tea steeped and prepared by an artisan, it’s worthy of adding this to your Bucket List. If you have, then you  now that what Americans call tea is an abomination.

That moment the dumpling hit my tongue is one of those moments that’s burned into my brain. It actually melted.

If your camera eats with you, be sure and abide by their strict photography rule—”Shoot only what’s on your table or sitting next to you.” Apparently, they’ve been invaded by Chinese spies who are actively persecuting members of the Falun Gong sect. Wow…spies and outstanding tea! What more can a wanderer ask for?

I left Radiance with a tin of osmanthus oolong tea and walked to Central Park.

It was Saturday and the park was alive with throngs of people having fun—picnicking, playing sports, walking, biking, and taking full advantage of the sunny day and little the slice of nature the park offered.

I lured my girlfriend back to Radiance for a pre-shopping snack—just a few hours after I had left, I walked up those hidden stairs once again and settled in for some more exquisite dumplings, tea and, this time, mochi ice cream. It was as flawless as my first time.

Back to the room to prepare for dinner, which came quicker than we hoped.

My husband’s business associate brought him to Gradisca just a week earlier and I was told that it was not to be missed. Opened in 2000, this place serves up mouth-watering Italian cuisine to a constant flow of eaters. Apparently, I lucked out getting a table for six at prime time on a Saturday night just days before.

After a nauseating taxi ride to W. 13th Street in West Village, we walked into a cozy room packed with conversation and mouth watering smells. Everyone who catered to us—from the host at the door to the young man who escorted us to our table to our jovial server—had gorgeous Italian accents and a desire to meet our every need.

We were seriously bummed to be booted from our table before we had the opportunity to try their desserts, but that’s the price one pays for making a last minute reservation. We just focused on our gratitude for being squeezed in on a busy Saturday night.

Fortunately, we found consolation desserts at Magnolia Bakery—coconut bars, banana pudding, and cupcakes were a worthy salve for the dessert wounds inflicted by Gradisca. This place is proof that you don’t have to compromise quality when you become a chain.

We landed onto our beds leaving a much deeper indentation than the previous day. Tomorrow’s forecast was for rain, which doesn’t much matter when you’re focused solely on eating.

Today we met my girlfriend’s distant family in Kips Bay at Turkish Kitchen. I could barely contain my excitement over another local recommendation! On Sundays, this place is known for their buffet brunch. I’m not usually a buffet fan because I can never seem to get my money’s worth, but I was optimistic that my stomach was sufficiently stretched out by now.

The spread looked impressive—and, it was an excellent sign to see lots of Turkish people with their plates piled high.

How do I give the food here justice with mere words??? There were several versions of tomato salad, the freshest of breads, assorted savory lamb, chicken, seafood dishes and rices, and half a table filled with exotic desserts. I had no problem devouring an entire plate down and doing the desserts justice—baklava, honey-soaked pastries, and custard. This place really does deserve all those plaques on the wall.

The rain had subsided enough to take a walk in Soho. Somehow I managed to find a couple of reasonably affordable treasures tucked away inside some incredibly pricey stores. Greenwich is definitely more my style.

We all needed to rest and time to digest if we were going to make it to dinner, so back to the room we went.

We got excellent news that our reservation request for Palma was confirmed. After tasting their exquisite sautéed cauliflower and drooling over their delicious Italian waiter on our food tour, we were driven to come back for dinner.

I can’t say it better than my girlfriend’s cousin—“Excuse my groans…it’s like my taste buds are having an orgasm.” (And this was without the Italian waiter!)

We had just enough time before rushing to the airport to try the city’s top-rated Halal cart on Yelp that just so happened to be directly across the street from our hotel.

Rumor has it that it’s the white sauce that earns them The Halal Guys their reputation. It’s also the price—for just $6.00, you get a plate piled with either chicken or gyro meat, plus rice and a salad. After they plop it onto your paper plate, they squirt the magic sauce over everything.

By the time we got to the airport, my girlfriend and I were both struggling to keep our Halal meal intact—I curse New York City taxi drivers.

This New York City food tour wander was food for my gluttonous soul and hungry body. While New Yorkers have managed to hang on to the artistry of the specialty, much of the U.S. has traded it for convenience. This is just one of the things that make New York City one of the greatest cities on earth.

It you’re anywhere near Brooklyn at brunch time, here are some suggestions from a local—5 Places to Get the Best Brunch in Brooklyn 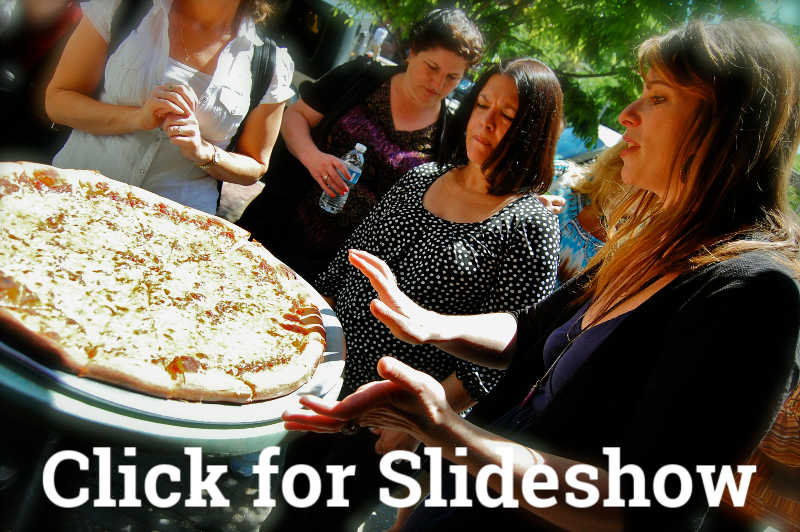