Skip to content
HAWAII: A Solo Trip to Kauai

HAWAII: A Solo Trip to Kauai

This stressed out mom needed a break. I needed time to finish incomplete thoughts and entertain new ones that were forcing their way in. My husband was practically pushing me out the door in the hopes that he would get his formerly sane wife back.

Where to go for a week of luscious solitude???

A bunch of places overwhelmed me—and, then a long buried memory surfaced, one that assured me I was meant to go on a solo trip to Kauai.

It had been many years since I at lunch with my husband and two kids in the Old Hanalei schoolhouse. I remember chewing on my sandwich and feeling that, one day, I would return there by myself. For some strange reason, the North Shore of Kauai literally beckoned me.

On this solo trip to Kauai, I would just be a woman—not a mommy, not a wife, not a friend. I needed time where I only had to answer to myself.

As the departure date got closer, a part of me that I had buried pretty much my entire way started pushing her way out. It was “her” idea to get a henna tattoo around my ankle, dust off my cute bikinis, and unbury some spicy books from the back of my bookshelf.

“She” also made me promise: 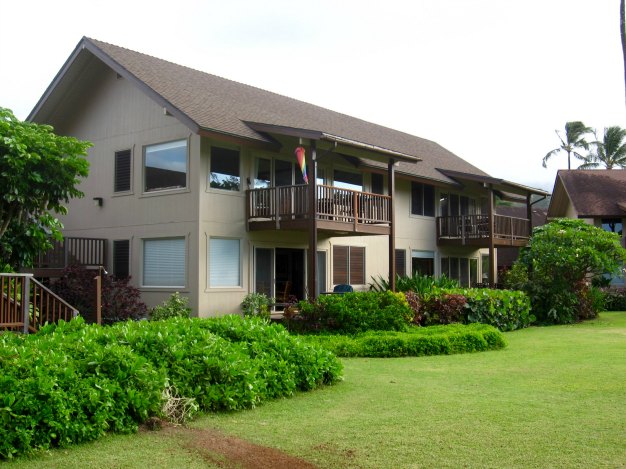 There are far more one lane bridges than hotels in the last section of the Kuhio Highway. Perfect. I had zero desire to be in the tourist zone. I needed maximum peace and quiet and, more than other wanders, I wanted to be amongst the locals.

That pretty much narrowed it down to a single hotel—the Hanalei Colony Resort. Oh, but what a magical choice it was.

The resort sits far past the quaint town of Hanalei, the tiny communities of Ha’ena and Wainiha, and the famous Tunnels Beach. It is surprisingly reasonably priced considering it’s adjacent to a quiet stretch of sand and within walking of Ke’e Beach and the Kalalau Trailhead. Look one way and you’re gazing at the Hawaiian sea…look the other way and your breath is stolen by Kauai’s rugged mountains.

My one-bedroom-ish unit was a few steps from the beach. I didn’t even have to leave my back patio to gaze at the ocean. It was small, but had everything that I needed—a semi-enclosed bedroom (with adjustable wood shutters), a functional living room, an open dining area, a decently stocked kitchen, and a tiny bathroom. Being that I was literally at the end of the road, I was thrilled to find an onsite bar and restaurant.

The Universe quickly confirmed I was exactly where I was supposed to be with a sign announcing the next evening’s belly dance entertainment.

I exhaled and started nesting. Six glorious days in this haven with no interruptions, no schedule and no one to consult with on the day’s activities??? It was almost too much to fathom.

My first morning, jet lag had me wide awake before the sun. My gift was a sunrise on a deserted beach. 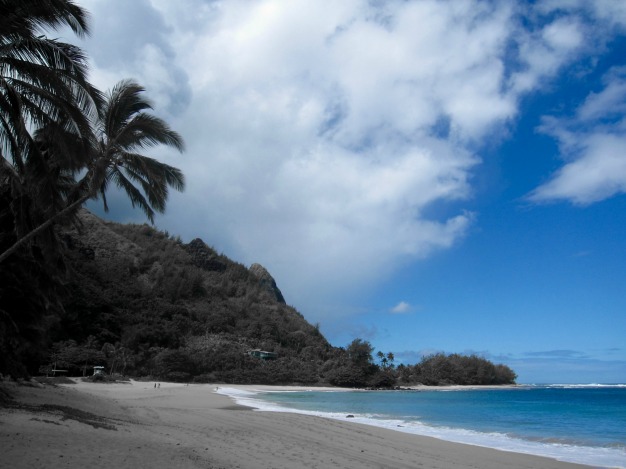 Even though I could have just plopped my towel down on my own semi-private beach, I decided to walk along the shore to Ke’e Beach.

It was further than I realized, but worth every sandy step. Surrounded by bright turquoise water, crashing waves, lush mountains and a crisp blue cloud-filled sky, I could have happily walked until I collapsed.

I found my quiet spot and made a nest where I read and napped for some unknown length of time…until a lifeguard truck brought me out of my stupor.

He was pounding signs into the sand. “CLOSED…DANGEROUS SURF.”

I decided to walk back to my temporary home. Not too far down the beach, I spotted a young couple pretty far out in the water. The woman seemed frantic. When I saw that the guy was pretty animated, I wondered if they were going to be the next tourists shamed on the evening news for ignoring the warnings.

I watched to see if I would be the one to make the call. As I studied them, I realized they weren’t frantic at all. They were excited and pointing down into the water.

Damn, I thought…if my husband were here right now, I could see whatever cool thing they were seeing. Then, I remember that he was just as much a rule follower as me and the signs made the rules crystal clear.

More thoughts came…why am I such an incessant rule follower? Why do I always play it so safe?

Out of fear. Fear of humiliation. Fear of injury, of course. As a result, I retained my pride and had never broken a bone. I had also missed many moments like this couple was having. And, I was drowning in boredom.

This moment was one of those forks in the road of my life. To the right was the predictable route back to the resort where I remained out of harm’s way…to the left was a treasure swimming in dangerous waters. The former would keep me safe and regretful…the latter, possibly mortified (or worse), but maybe as joyful as the young couple.

I was frozen for a moment…then, Kauai spoke to me again. It was time for me to start turning left. So I did.

I tossed my beach bag behind me, stripped down to my bathing suit, and started walking into the sea.

I wasn’t going to be a total idiot. My plan was to keep my feet clenched to the ocean floor, while I hunted for the treasure. The water went from my ankles to my shins to my thighs.

I recalled the lesson I learned in the rain forest—be still and wait.

Nothing. Now, my butt to my waist to my stomach to my chest. More stillness, more waiting. And, there…it…was.

My treasure…my reward for being brave and turning left. A family of honu. Swimming toward me were maybe eight sea turtles—parents, babies, probably grandparents, coming to check me out.

There is something spiritual about sea turtles. I felt it and I soaked it up all by myself. I wouldn’t have it any other way. Holy shit.

And, then they were gone. As corny as it may sound, this seemingly simple experience dramatically changed me. I could feel the door open. I was not the same woman who had just wished for a husband to protect her.

I spent the rest of the day on my semi-private beach, absorbing the Kauai sun in various states of consciousness and  finding myself on the pages of the first book of the trip.

During one of my more conscious moments, I pondered the Kalalau Trail.

Apparently, the trail is pretty treacherous…usually quite slippery as it winds above steep sea cliffs for 11 miles. It starts at Ke’e Beach, goes through the Kalalau Valley, and ends at Kalalau Beach on the rugged and breathtaking Na Pali Coast.

You can’t get there by foot any other way—and any sane person wouldn’t plan on going there and back in one day. There are no hotels on Kalalau Beach. You camp in your very own tent that you carry in on your very own back.

Despite feeling quite empowered at this moment, it was clear that this adventure wasn’t going to happen on this trip. It is, however, now an official item on my growing Wander List.

That night, I walked into the resort bar without one bit of awkwardness, ordered my new favorite cocktail—a decadent Lava Flow—at the bar, and had a serious case of tattoo envy as I watched the belly dancer do her thing. 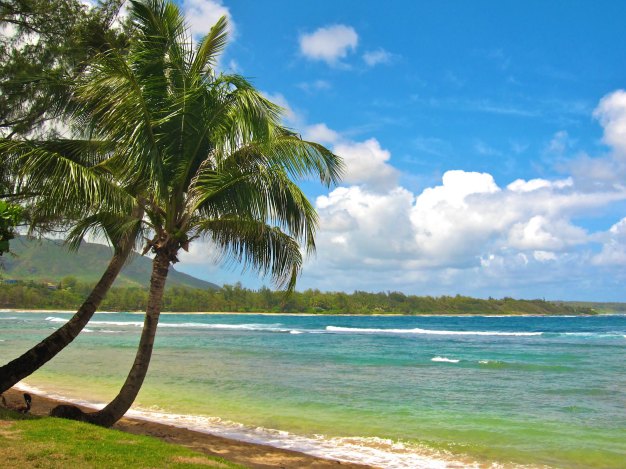 It pays to befriend locals.

I spent my second day driving to some of the North Shore’s less crowded spots—a taro field, Queen’s Bath, Anini Beach, Kalihiwai Beach, Secret Beach, Kilauea Point, Moloaa Beach—and a few “secret” ones that I swore I would never divulge. As this six sentence paragraph will attest, I was left a bit speechless by everything I saw. And, I didn’t break my promise and experience everything from behind the camera.

It was spectacular. As I pulled into the resort later that afternoon, I noticed that despite never having been to any of these places before, I had a strange feeling that I had come home.

I walked into the buzzing Tahiti Nui—possibly looking a bit like a deer blinded by headlights. Within seconds, the server approached me with an inquisitive look.

“Are you here for drinks or dinner?”

“Just drinks…and hopefully some good music,” I said with a smile.

After a short pause, she asked another question. “Are you alone?”

Another unsure pause—then a reciprocated smile. “Well, in that case, I have just the seat for you.”

She walked me to the back side of the bar and said, “Meet Uncle Art. He’ll protect you.”

I spent the next couple hours soaking up the company of a 70+ year old local who started off our conversation informing me that I had just missed George Clooney and the cast of The Descendants by just a few months. He went on to share the fascinating history of this tiny iconic North Shore hangout (the original owner being a character in South Pacific) and life on this tiny island for the past several decades.

What a privilege and an honor. Pretty ironic that I had one of my most social travel moments on my solo trip to Kauai.

Coming here alone truly was one of my better decisions in this lifetime (so far). The time flew by. I will never be the same. In fact, I feel like a new woman. Mission accomplished.

If you’re debating about taking your own solo trip to Kauai, stop and DO IT.

If you do decide to take the leap, here is a FABULOUS article by James who also took a solo trip to Kauai and shares a bunch of very helpful Kauai travel tips—Solo Trip to Kauai, Hawaii on a Budget 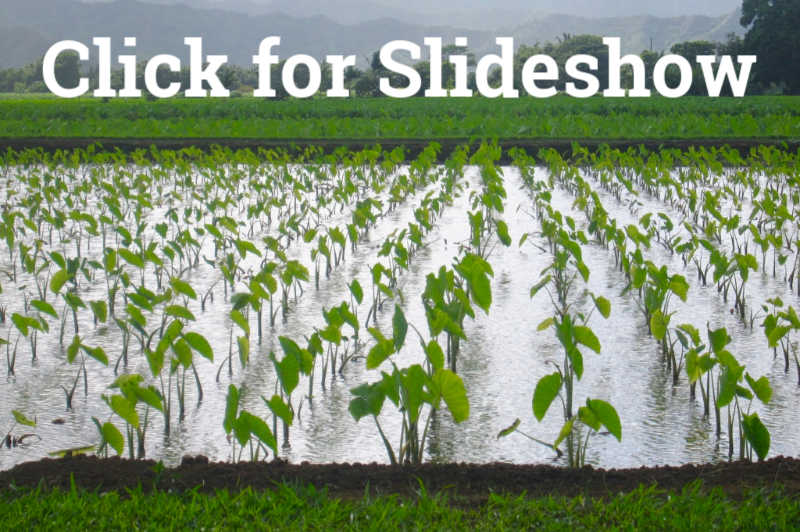