Skip to content
BELIZE: No Shirt, No Shoes, No Problem on Ambergris Caye

No Shirt, No Shoes, No Problem

After several days at Chan Chich Lodge in the Belize rainforest, we wandered to Ambergris Caye. This was the beginning of a love affair with Belize that is still going strong to this day. 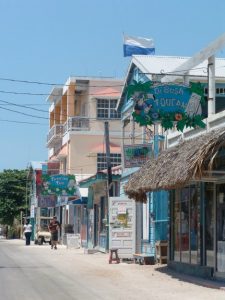 The day I had been dreading finally arrived. The next hopper flight from Gallon Jug Airstrip to the town of San Pedro in Ambergris Caye. Let’s just say, I progressed. Although well into the mouth-watering phase, I (barely) managed to maintain possession of the contents of my stomach. When we stepped off the plane, we stepped back in time.

San Pedro is straight out of a Jimmy Buffet song, populated with packs of middle-aged divers and sailors, nervous honeymooners, a few adventurous families, lots of escapee parents (just like us), and an eclectic blend of locals. It has a distinctly Caribbean flavor, which we had been told (by Daniel the Pilot) was a result of the country being a haven for former prisoners and slaves from the West Indies.

The majority of the streets are dirt and lined with colorful shops and vendor stands selling everything from fresh fruit to diving services. The primary modes of transportation are golf carts, bicycles (faster than the golf carts), and dirty feet. Being a former English colony, the official language is English, but you’ll hear a mix of Spanish, Creole and English, peppered with four-letter words and “Ya, Mans.”

Unlike over-touristed destinations, the locals here are genuinely welcoming of the tourists who were adventurous enough to come to this little out-of-the-way Central American town.

Being slightly overwhelmed, we were grateful to be met by our land taxi that took us to a water taxi that took us straight to our home for the next several days—Journey’s End Resort (now closed). We would definitely come back to San Pedro soon…after we shed our luggage and got our bearings.

We were greeted on the Journey’s End dock by Bill, a Creole Belizean wearing one of many pairs of colorful Converse high tops and bearing a tropical drink in each hand. After being encouraged to relax Belizean-style for a while, we were eventually shown to our room …a tiny plantation-style bungalow just steps from the shore.

Having missed the last afternoon water ferry back into town, we decided to walk. I’m sure there were a few staff chuckles going around about the naive tourists who didn’t know it was 4-1/2 miles down the beach. We got about a third of the way there when two inebriated Americans barreled around the corner in a golf cart, nearly slamming into us. Their apology was another one of those tropical drinks and an offer of a ride into town.

We spent the next 45 minutes drinking rum punches at Captain Morgan’s Resort with Alan [a retired family physician] and James [with the Department of Defense], two avid divers on a mission to drink all day. Captain Morgan’s was a great place…thatched roof cabanas dispersed along the sand, an abundance of hammock-endowed palm trees, beached catamarans just begging to be pushed out onto the calm turquoise water, two oceanfront swimming pools, and a damn nice bar.

Back to San Pedro Town

During the bumpy ride to town, our chauffeurs decided to drop us off at their favorite restaurant—El Fogon. 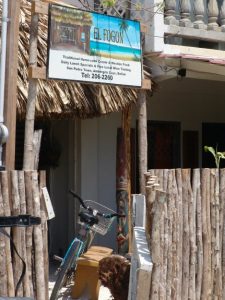 El Fogon (ell FŌ-gōn) may look risky, but I assure you it is an AWESOME restaurant with a loyal following of patrons [including myself] who have not just survived, but reveled over, several meals here. Located at #2 Trigger Fish Street, the owner serves up some killer Creole food on several wooden picnic tables arranged on dirt floors. We devoured the most amazingly fresh [REAL] red snapper…a meal you can’t find in the states. And, the fritters…oh my. This place is definitely one of my best souvenirs.

Next stop Fido’s Bar (“Fee Doze”) for another one of those tropical concoctions and a local band doing a damn fine job with the Eagles and Jimmy Buffet, of course.

We were prime [mildly intoxicated] suspects for the puppy lure placed directly in our path back back to the ferry. All I intended to do was snuggle a little baby soft fur and collect a few puppy kisses, but the owner had other plans. Raul’s stealthy tactics earned him a nice little commission on the sale of a Captain Morgan’s timeshare. That’s right. There were to be many return wanders to this little slice of Heaven in our future. At this point, I’m thrilled. Will we have a bad case of buyer’s remorse once we reenter the real world? (Flash forward several years…and, I’m happy to say I remain healthy to this day and am, in fact, even more in love with the still un-crowded Belize.)

An underwater trek through the aquatic jungle at Hol Chan Marine Preserve should be on everyone’s Life List. When your tour boat arrives at the preserve, your guide must check in with the guy with the most coveted job in Belize…the fee collector. [He’s the one lounging in the bobbing boat with his hand out.] What a life. As soon as the deal was sealed, we jumped into the water with our guide.

Here’s a visual…that underwater screensaver you’ve seen a jillion computers. It’s here – for real. Complete with a 4-foot and very green moray eel, several massive leopard spotted rays, and a few 8-foot nurse shark and the water temp of a heated swimming pool. Now this is my kind of place to snorkel—until I start feeling nauseous.

The next day we woke up to warm, gale force winds (the locals called it a “breeze”), which nixed any water-based activities. It was the perfect day for venturing out to experience more local color, so it was back to San Pedro to catch a water taxi to Caye Caulker, a small laid back village on a tiny island we could see from Captain Morgans.

Caye Caulker takes color seriously. The buildings that line the shore and sandy “streets” are pulled right from an eccentric painter’s palette. A single house might be painted two, three or four colors. Turquoise, golden yellow, mango, chartreuse, royal blue…whatever struck the painter’s fancy or happened to be on sale that day.

This is the “budget” island…poorer than San Pedro and the destination of choice of rebel travelers who resist conformity, poor students, and life’s drop-outs stretching their travel dollar as far as possible. If you’re ever looking for a place to escape and recapture your spirit, look no further…you’ll find it here.

Back to Ambergris Caye

Life in Ambergris Caye is unhurried with just enough potential activities to stave off boredom. With a bar about every 30 feet, you could take off your shoes [and shirt, if you’re a guy] at the San Pedro Airport and never once put them back on until you boarded the plane. The sign that welcomes you to town says it all…”No shirt, no shoes, no drugs…no problem!”.

I’m thrilled that I’ll be returning back to Captain Morgan’s in Ambergris Caye every other year until my traveling days are over.

Get more tips on visiting Belize gathered over my many future wanders: 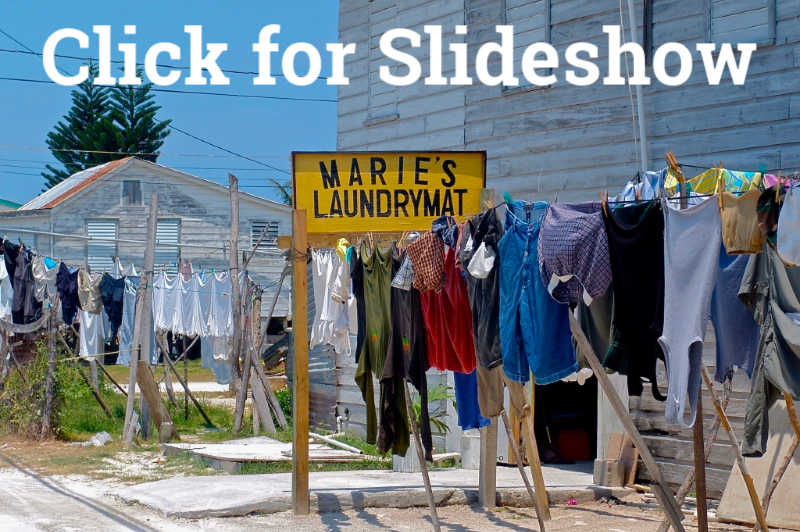