One of the perks of living in a tourist town is the ability to rent out one’s home to people willing to pay a ridiculous wad. This pays for our annual family vacation—and then some. This spring break we wandered to San Francisco with teens — or, more accurately, one teen and a tween who, for all intents and purposes, was a full on teen.

Our home for the week was the Beresford Arms Hotel near Union Square.

The Yelpers were spot on—it was a slightly tired building in a fabulous location and was one of the best deals in the city. Our “room” was actually a former one-bedroom apartment complete with a full kitchen, Murphy bed, two TVs, and a huge bathroom with a jet tub. All for $199/night!

Midway through the first night, the whole “You get what you pay for” thing clicked courtesy of a non-stop clanking radiator. A mix of muffler-less motorcycles, intoxicated revelers and a seemingly endless stream of sirens had us yawning from the moment we climbed out of bed.

Crepes for breakfast at Honey Honey were just the energy we needed for our three hour walking tour of Chinatown. 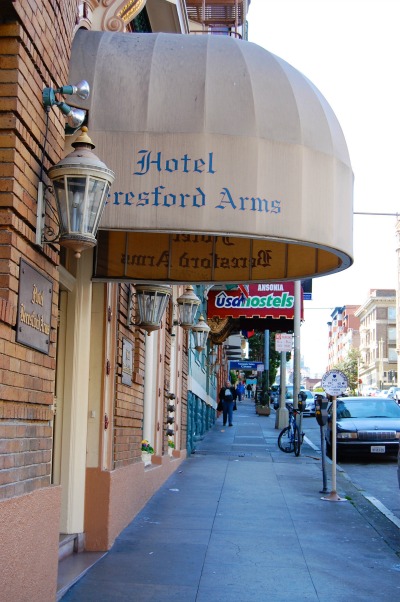 Our kids looked at me like I had totally lost it and reminded me of my “No more tours” deal. I looked at them confidently and said, “But, this one is going to be cool—it’s led by a woman whose family has lived in Chinatown for generations and it ends with a dim sum lunch!”

I knew I was screwed when we met up with our group—it was us and a large group of marveling Midwesterners and a very non-Asian guide.

Over the next two hours, I kicked myself for wasting $160 and tried to avoid eye contact with my kids who were not happy that they were hearing the identical stories I read to them from a guide book on the drive from San Diego.

At the end, I took my “I told you sos” with humility, then reminded them of the few priceless moments—like the elderly gamblers in Portsmouth Park, the (real) funeral procession led by a marching band, and the facial expressions of the Midwesterners when the dim sum arrived.

I repaired some of my damaged reputation at The Natural Tea Shop where we were treated to an intricate demonstration of tea brewing and tasting.

I crammed a lot into this day as the two-day forecast called for rain.

Our next stop was Stow Lake in Golden Gate Park for some row boating. When we arrived to a closed boat shop, I wondered what I had done to deserve San Francisco’s curse. Fortunately, the bike shop was still open and we grabbed a giant trike (for the pre-teen), a quad (for the teen), and one suitably humiliating surrey (for the bonehead parents).

My teenager proved he did have a memory, albeit a selective one, when he remembered the tiny restaurant we came to a couple of years ago and ate killer baked artichokes. I bought myself some forgiveness by returning to Park Chow (now closed) to order some more.

Day 1 in San Francisco with teens had me on teenage probation.

Today was Easter Sunday. The kids were thrilled that the bunny found them and that Honey Honey was open for the business of crepes.

Unfortunately, the weather forecasters were spot on and the rain came. The teen happily stayed with the tween in the clanking hotel room, while we parents popped up our umbrellas and headed out for a gourmet food tour of Hayes Valley and a break from the kids.

Our Jewish guide didn’t mind a bit working on Easter, or that it was raining, and plied us with mini cupcakes at Delessio, tea and chevre-stuffed dates at Samovar, French fries and another crepe at Frjtz, real French macarons at Paulette’s, sake at True Sake, artisan cheeses at Arlequin, and a spicy rum cocktail at Smuggler’s Cove (which is basically Pirates of the Caribbean for adults). I think food tours could be the exception to our family’s “No tours” rule!

We felt (only slightly ) bad for leaving the kids in the room for the entire day, so we pushed through our food coma and headed to the Century SF Centre 9 Theaters for a 3D showing of Alice in Wonderland.

After more crepes for breakfast, we were off to the Ferry Building Marketplace.

Although smaller than New York’s Grand Central Market, it had plenty of gourmet treats, fresh flowers, and artisan creations to keep us captivated. It was a brutal decision, but we made it—lasagna, a BBQ beef sandwich, and a salad from the Golden Gate Meat Company were the lunches of the day. Eaten on the back deck with killer views and Hitchcock birds!

Next stop—Fisherman’s Wharf and Pier 39 by way of a retro trolley. The first thing we did was get lost—inside Magowan’s Infinite Mirror Maze. For a grand total of $20, the owner let us wander through the maze as many times as we desired. I was the first one out with a mild case of motion sickness—the kids didn’t want to leave. 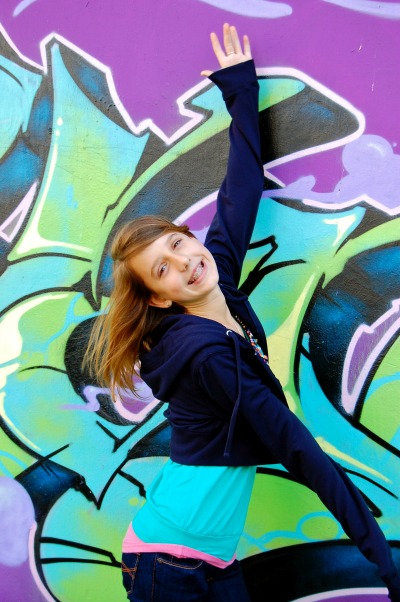 We cruised around Pier 39, never staying put in one spot long enough to get trapped. To be honest, I’m just not a fan of touristy spots. The sea lions were cute, but fragrant. There were a couple of decent stores. The cupcakes we came across didn’t hold a candle to the ones we were treated to in Hayes Valley. We acquiesced to the kids’ request for a hot chocolate at Ghirardelli Square, then freed ourselves.

We found another little treasure for dinner—Buena Vista Cafe is the home of the first Irish Coffee in the states. This place has been going strong since the early 1900’s, and serves up a decent meal to both tourists and locals. My hard-to-excite husband claimed it was the best Irish coffee he’s ever had. That speaks volumes!

The grand finale of the day was a night tour of Alcatraz. On the way to Pier 33, we pit stopped at The International Spy Shop where my teen thought he’d died and entered Paradise. Explosive Diarrhea Serum, audio devices that make people nauseous, x-ray glasses—all denied by dad (who won’t be forgiven for quite some time).

We joined the cattle queue at Pier 33 at 5:30 p.m. A cold ferry ride, a colder guided walk into the prison, and new glares from two very tired kids had me wondering if I had screwed up once again. Fortunately, we were free to wander after only 15 minutes, each with our own set of headphones that filled our heads with stories of Alcatraz as told by former guards and prisoners. The final verdict was two thumbs up from the teen and tween. Phew!

We changed it up for breakfast this morning and crossed the street to the highly rated and very tiny farm:table. There wasn’t much to it other than a single communal wood table—but, there was VERY much to it when it came to the food, which included a small selection of baked goods, the BEST coffee, REAL loose tea, and a cereal, toast, and egg dish of the day. My inner food glutton was so very happy—this place reminded me of New York City. This was (hands down) my favorite restaurant in the entire city to date.

I was extra hopeful about today’s plans. We would be exploring the Haight-Ashbury district. It started off with a bang.

Said the pissed off hippie to the Christian missionary spewing hellfire on the street corner—“THIS IS WHERE I HANG OUT…I DON’T WANT TO HEAR YOUR CRAP HERE!!!”

We all wanted to high five him. 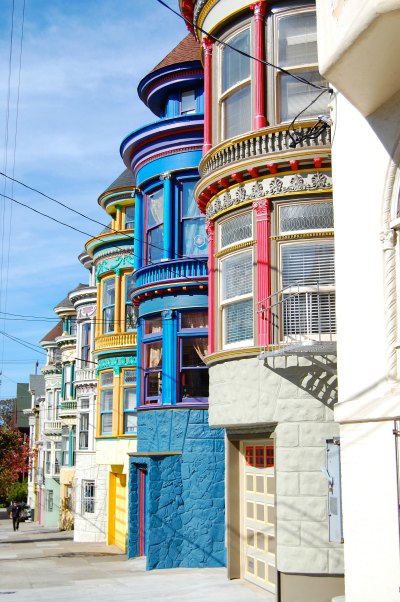 Our first stop was lunch, of course. We gorged on Caribbean fare at Cha Cha Cha—plantains with black beans and sour cream, a roasted pepper and chevre sandwich, a flank steak sandwich, and a chicken quesadilla. Outstanding!

After lunch, we counted smoke shops as we shopped. The stores were interesting enough to keep the guys engaged, especially Loved to Death—purveyor of stuffed dead animals, faux shrunken heads, bone jewelry, and more ponderables.

At the end of Haight Street, I dragged everyone into a lush wooded park and up a staircase until we reached the sweeping views.

We had just enough time to make a quick little detour before dinner to Seward Mini-Park. This micro park is tucked inside a residential neighborhood not far from Haight-Ashbury. Word had it that it was home to some seriously fast slides and is haunted by the Seward Street Witch (actually a very real old woman who yells at sliding people).

Even though the slides were way smaller than our imaginations had made them and the park smelled of vinegar and we never did encounter the witch, we enjoyed being little kids for a short time.

DAY 5—Back to San Diego

As we drove back to San Diego, we talked about our trip. To be cliché, San Francisco had a little piece of all of our hearts. We all agreed that our San Francisco with teens trip may possibly have pushed our New York City with tweens trip out of first position in our list of favorite U.S. cities, mostly because of its more manageable size, stunning architecture, interesting sights and activities, and equally amazing food.

The kids will always remember it as the last place they would ever have to take a tour that didn’t involve food. 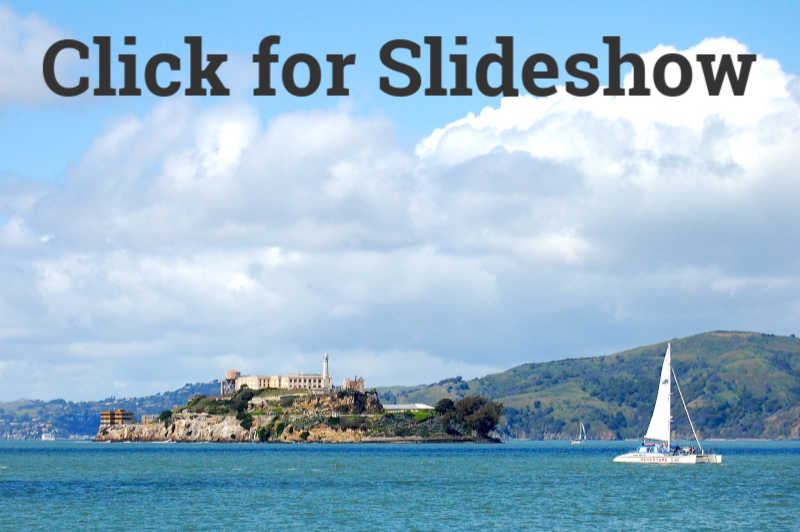