Part 1 of our behemoth summer road trip was spent under behemoth trees in the California Redwoods. After soaking up nature at its best, we headed south to meet up with friends, meadows, caves and more behemoth trees on a Sequoia National Forest Camping trip.

Today was a helluva looooong day. Nine hours on Highway 101, from the Redwoods to Novato for a one-night stopover before continuing on to Sequoia National Forest.

The brief highlights were two quick pitstops in each of my two Sonoma County home towns—Geyserville and Healdsburg. When I lived in Geyserville, it barely qualified for the map. Surprisingly, downtown was even quieter than it was three decades ago due to several missing stores. I found myself wishing the kids and hubby had the stomachs to make the six-mile dirt road journey to our old guest ranch. (“Now kids, when I was a young ‘un, it took me 45 minutes and a barf bag to get to school every day.”)

Instead, we pushed onward to Healdsburg to confirm the rumors. I didn’t believe until I saw it, but they really were true. Gone were [most of] the tobacco chewing rednecks and hydraulic pumping low riders, replaced by wannabe Europeans and throngs of tourists. The three houses I’d lived in had shrunk since I’d lived there. The “beach” I hung out at looked…well, seriously unappealing. (“Yes, kids…I really did swim in there.”) The town plaza where the migrant workers had once taken their siestas was now surrounded by pricey boutiques and trendy bistros rumored to set a couple back $100 for romantic lunch. I just missed it by 30 years.

That’s IT. The RV “bible” I’d purchased for this trip has been demoted to booster seat, doorstop, or kindling. The author and I are from alternate universes. While I hope for grass, he’s crazy for spacious concrete pads. While I prefer to be lulled asleep by crickets, he clings to instant access to the interstate.

When we pulled into Novato RV Park (“The Best of the City in a Country Setting”) we debated making a U-turn and surrendering to the KOA we’d just passed where we swore we saw a tree. But exhaustion beget surrender so we squeezed in between a rickety wooden fence and a 45 foot bus. The only green in sight was the sign prohibiting kids from riding their bikes. Before we stopped rolling, I was controlling myself at the front desk while I waited to get some “clarification” on this rule from the young man on the telephone. Something told me that I wasn’t the first crazed mom that stood before him. His advice was sage. “Oh, just ignore the signs just like everyone else does.” It’s hard to believe, but I could not wait to be on the road again.

I wish I could say the second half of our journey to Sequoia was as mind-numbingly uneventful as the first. Our brush with tragedy was an event I will never forget. Just the merge onto Highway 205, just south of the Bay Area, was harrowing as we tried to squeeze our behemoth vehicle into a solid chain of semis and cars. (The kids may have learned a new word…or two.) A few minutes after releasing our breaths, a pick-up truck carrying an agitated passenger pulled up beside us.

My husband and I do not shine at charades…it was our 11-year old son who finally brilliantly proclaimed, “I think he’s trying to tell us something’s wrong with the trailer!” Oh God, we have to pull over??? The look on the guy’s face said the alternative might be worse. The next thing I knew, we were safely on the shoulder and my husband was carrying our trailer bumper (with bikes still attached). It had partially detached and had been dragging on the interstate for at least five minutes. We both stared in disbelief at the two 6″ spots – only one of which was still attached – that more than one idiot had expected to support an 8′ solid metal bumper and loaded bike rack. I have no doubt someone narrowly escaped dying.

We threw our damaged bikes inside the trailer, said a guilty goodbye to our bumper, and survived the re-merge onto the freeway-from-hell. We were shaken up, but overwhelmed by gratitude for a good samaritan and our smartypants son. An hour later, we left the local bike shop with four mended bikes, a receipt for $100, and a deep-seated hope that we had reached our disaster quota for this trip. Several hours later, we pulled into the lovely Space 54 at Dorst Creek Campground. The better-than-expected setting and friends-for-all were exactly what we needed.

Bear warnings were plastered everywhere we turned. Apparently, the recently departed intoxicated July 4th revelers had wooed the bears out of the woods. “Do NOT leave any sealed or open food, empty or full coolers, toiletries, cleaners, or trash anywhere in your car or on your campsite.” “Do NOT leave your windows open at night while sleeping in your trailer.” “If you do happen to encounter a bear, try to look big and sound loud.” (Being a seasoned mom, I was quite qualified to do the latter.) A single food violation would set you back $150. I had a moment of gratitude for our behemoth trailer. 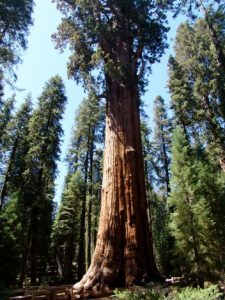 We were booted from Space 54 due to a prior reservation, but quickly relieved for the lateral move offered by Space 34. Even so, we had a case of space envy as we gazed upon the tree-covered Space 60, which sat on top of Dorst Creek. Next time.

You can’t come to Sequoia National Forest without paying homage to General Sherman. The “largest living things on earth” and the main visitor attraction in the park, the General Sherman Tree will strain your neck. As I rubbed mine, the European woman standing next to me perfectly proclaimed, “Everything in America is big!” In this case, this was not a bad thing.

A recent wind storm gifted us with some serious perspective by knocking one of Sherman’s branches to the ground. It was the size of a regular tree and had imbedded itself deep into the asphalt pedestrian path.

Today we could have died in a meadow. After a restful morning, we drove to the trailhead to walk through Crescent Meadow and explore Tharp Log. Before the walk, I thought…”Oh, how nice, I like meadows.” During the walk, I thought…”———–.” There were no words. Were I a poet, I might be able to capture what dazzled each and every one of us [even the Play Station desensitized 11 year old boys], but alas I am not. Even the photos don’t do it justice.

Almost immediately after the trail begins, you’re dazzled by the sight of the meadow. Ringed by tall trees, it’s lush, sprinkled with tiny wildflowers, and home to a brown bear or two (soon to be confirmed by our friend). It was Paradise. Eight year old Hannah said, “I could just die here.” We walked as far out into the meadow as the giant fallen logs would take us…we didn’t dare let our feet contaminate the hallowed ground. Once the trail leaves the meadow, it winds through a forest of tall sequoias engulfed in ferns and more wildflowers.

Tharp Log is the former home of an explorer who, rumor has it, was the first “white man” to see the sequoia trees. The name is literal. In the mid-1800’s, Tharp carved out a cozy home inside a fallen tree that fell between the forest and another small meadow. It’s been preserved in its original state, furnished only with a table, bench and bed. Before the land was designated as a national forest, Tharp spent his summers here. Determined to see a bear, our friend poked around in the meadow…only to come barreling out a few minutes later to the amusement of the rest of us “I told you so-ers.” 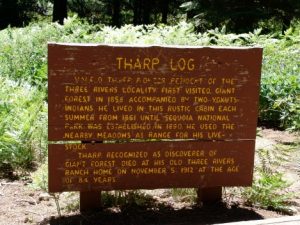 Because we had been overcome in Crescent Meadow, we had to rush to our next destination. The journey to Crystal Cave entailed an eight mile drive followed by a 10 minute run down to the cave entrance. We arrived just as our guide began her lecture. The entrance gate itself is amazing. Constructed in the 1930’s, it’s a spider web complete with spider handles. The holes are just big enough to let bats fly through, but small enough to block those pesky after hours humans.

We’ve been inside a fair amount of caves, but we all agreed that this one deserves the blue ribbon. It’s name originates from it’s sparkle. Thanks to the concrete paving installed on the interior pathway in the 1980s, the once struggling stalactites and stalagmites are sparkling brighter ever day after being dulled by pollution and human contact. The bright blue swath of underground river that cut through the golden yellow rock was the icing in the cave. We left grateful we’d made the effort to get here…and, totally spent. Later that evening, our lives were forever altered around the campfire upon being introduced to lemon meringue s’mores.

Today was tranquil…spent hanging, playing, reading, puzzling, and wandering the grounds. We found a charming trail beside Dorst Creek that took us and the girls inside a mini-forest. Watching our daughter and her bosom buddy urging and cheering their leaf boats down the creek was a thoroughly simple, yet priceless, pleasure. Later we bought ourselves another pleasure by driving the two boys just up the road to an ice cold waterfall that spilled into a deep swimming hole. The slimy algae covering the smooth granite rocks turned this little spot into Nature’s Slip ‘n Slide and gave us memories to last a lifetime.

Tomorrow we pack up and head for home. If not for my fantasies of clean laundry and an hour long scalding shower, I could do this for another two weeks. Sequoia National Forest Camping was absolutely wonderful.

TRAVEL THERAPY #4: Searching for My Tribe 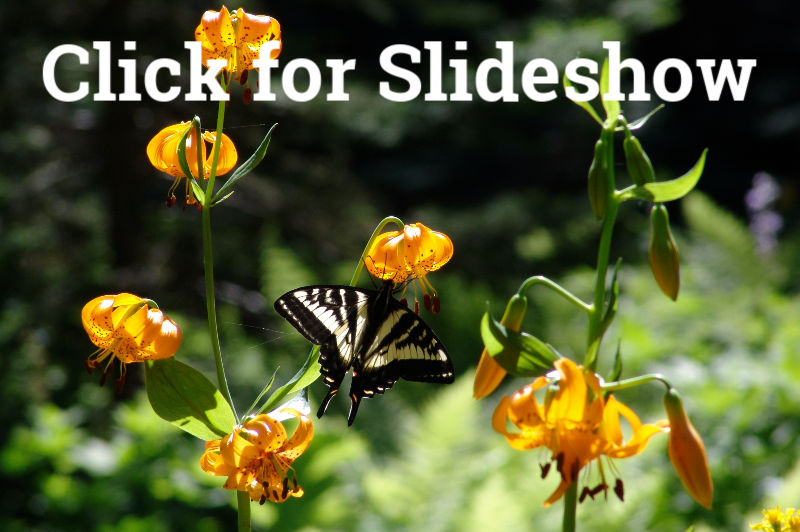