Where to Get the Best Fish Tacos in San Diego

Rumor has it that fish tacos originated in the Mexican port town of Ensenada back in 1958. Really? Okay, if Ensenada says so. I think it’s far more likely that there were many an ancient native wrapping a maize tortilla around the catch of the day and groaning with pleasure. Whenever and wherever they started, they’re everywhere now—even on the East Coast where authentic Mexican cuisine is about as easy to find as a tan. San Diego is fortunate to have both tans and fish tacos just about everywhere you look. Some are the real thing, but many are not. Hence, I set out to do some taco taste testing to find some of the best fish tacos in San Diego town.

If you’re not intimate with fish tacos, there are just a few basics to know. The “musts”—flavorful fish (deep-fried or grilled), crunchy cabbage, savory sauce, and several wedges of lime. Corn tortillas are traditional. The “extras”—like marinades, tomatoes, cheese, onions, or sometimes something totally original—keep it interesting. 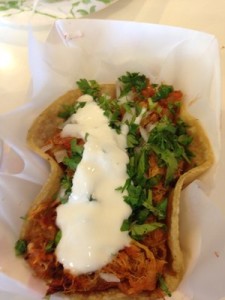 TJ Oyster Bar is a tiny place in a Bonita strip mall serving up some dang good tiny tacos. The proof is in the crowd. For $1.00 (yes, a BUCK) you get the traditional deep-fried variety with cabbage and sauce inside a miniature corn tortilla. For an extra buck, you lose calories and gain flavor with the grilled version. Throw in some more coins and you’ll get something that used to have a shell or may or may not have tentacles. Don’t expect atmosphere for mere bucks, but do expect to be very happy you waited in the long line. 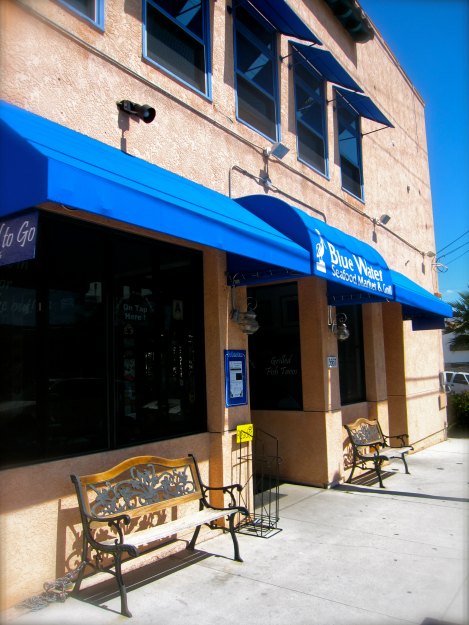 I was told my research would be incomplete without a visit to Blue Water Seafood Market & Grill. First, I was impressed by the choices—no less than 13 (T-H-I-R-T-E-E-N) options for the fish inside my two white corn tortillas AND S-I-X different marinades (lemon butter, lemon garlic butter, teriyaki, blackened, chipotle or bronzed). I was further impressed by the gift of an entire filet buried under a mound of cabbage, onions and cheese in said tortillas. These artistic creations are just a few shakes of salt away from flawless. The price tag? Mere bucks once again—cuatro, to be exact. This deserves a “Wow.” 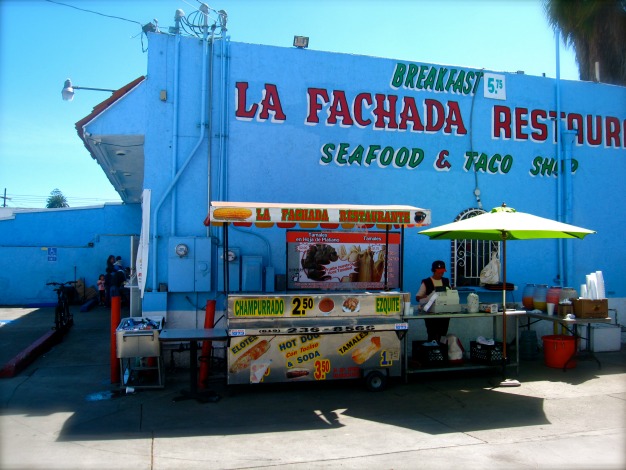 Toto, I’ve a feeling we’re not in San Diego any more. More like TJ (AKA Tijuana). La Fachada is the real Mexican deal—so, I was bit disappointed to be a bit disappointed when I took my first bite of their $2.40 fish taco. If you love mayo, they’re right up your alley. And, I missed the crunch of cabbage (note the “musts” mentioned above). I have a feeling they serve up a killer carne asada though, so I’ll be coming back to this San Diego icon soon. 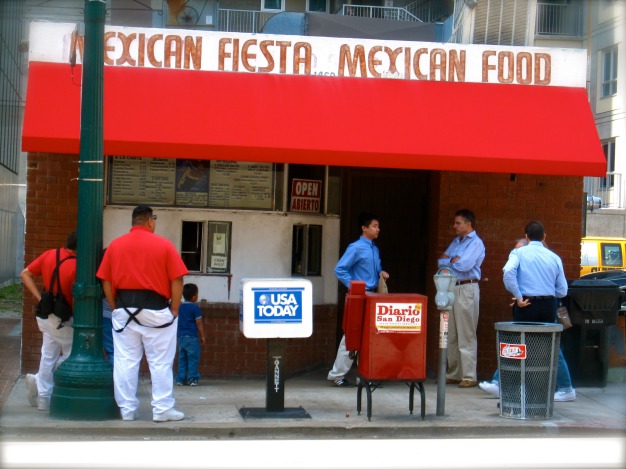 Hail to Yelp!!! Yet again my fellow Yelpers remove all apprehensions about food poisoning and turn me on to a “hidden” culinary treasure. If you blink as you drive down India Street, you might breeze right on by Mexican Fiesta. One step up from a food truck, it’s just big enough to house a compact kitchen, cash register, and two employees. Walk up to the window of this tiny place, and you will get a huge treat—deep-fried fish (check), cabbage (check), savory sauce (check), and, a deliciously tangy tomato salsa with a kick. A parking place and two bucks is all it takes. 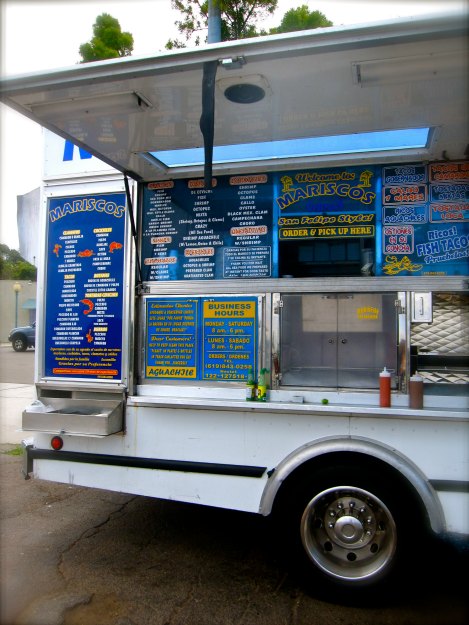 I discovered Marisco’s German Taco Truck when I saw a small crowd milling about in a parking lot on 30th Street in South Park. Sometimes being a nosy wanderer pays off in a big way. The first big way was a cup of free soup. The second was a mixta ceviche tostada for $5. WOW…so, of course, I had to taste their fish taco. Their La Plancha Fish Taco (served with more free soup) was outstanding—grilled and with all the “musts.” I will definitely be stopping by here again. 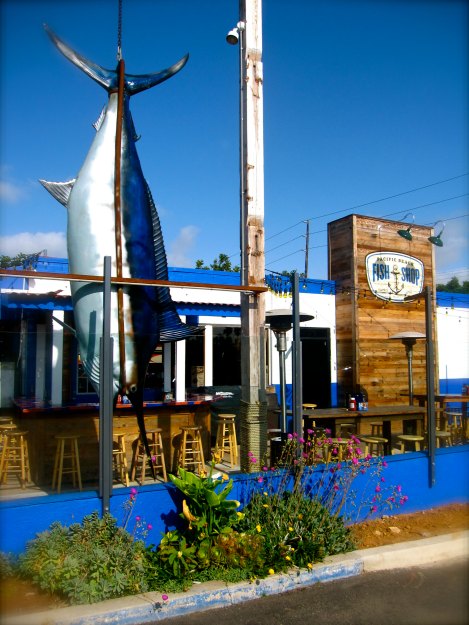 The Pacific Beach Fish Shop was my personal Numero Uno. It had so many lovely choices—12 varieties of fish and 8 marinades—and all the “musts.” A higher price tag than my other stops ($3.50-$5.50), but totally worth the investment. And, the staff was seriously hospitable. I hadn’t even gotten in the front door yet and I’d been welcomed. Looks like I’ll be making more trips to PB in the future.

Want to add to this list of the best fish tacos in San Diego? Just leave your choice in a comment below!