The Historic Village Theater in Coronado

In 2000, the Grinch didn’t just steal Christmas. After serving as the stage for 63 years of cinematic and personal memories, the Village Theater in Coronado abruptly closed its doors.

But, unbeknownst to island residents, the action continued behind the scenes…

Almost immediately after it closed, Lance Alspaugh of Vintage Cinemas set out to bring the theater back to life. Based in Los Angeles, Vintage Cinemas operates select classic movie theaters that offer patrons a “timeless moviegoing” experience without forgoing modern perks. Village Theater is their third movie house, in addition to Vista Theater (1923) in Hollywood and Los Feliz Theater (1934) in Los Angeles.

Built in 1947, Coronado’s Village Theater was originally a 600-seat single screen movie house. With financial backing from Coronado’s Redevelopment Agency, the dedication of a variety of talented specialists, and an investment of $3 million, the original marquis is glowing once again.

Renowned theater designer Joseph Musil, who is responsible for the beauty of Hollywood’s El Capitan Theater, is also the genius behind the Art Deco splendor of Village Theater. Although he died before its completion, he was able to give enough direction for the design team to complete his vision. 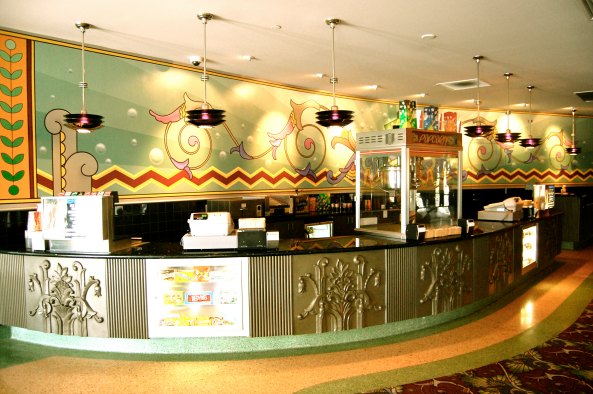 In order to allow for proper movie rotation, which is necessary for survival in today’s moviegoing market, the theater is now a triplex with a 215-seat main auditorium and two (tiny) 45-seat screening rooms.

Despite budgetary glitches typical for a project of this caliber, no detail was overlooked. The most jaw dropping features are the glowing three-dimensional murals depicting downtown San Diego’s skyline, Balboa Park, and the Hotel Del—all hand-painted by acclaimed Disney muralist Bill Anderson.

Although you may feel as though you’ve stepped back in time after purchasing your ticket at the single box office, walking through the classic lobby with its solitary snack bar, and sinking into your lush chair surrounded by exquisite art, the state-of-the-art technological features—including Sony Digital Cinema, Dolby Digital Sound, and two RealD 3-D screens—keep you firmly rooted in the present.

Village Theater reopened to the public on June 24, 2011, with the screening of Cars 2. It continues to play a variety of major first run productions and independent artsy films.

Rather than line up behind the hordes of followers at the local Mega Plex, I highly recommend breaking free from the chains, crossing San Diego Bay, and enjoying a taste of Americana and small town service at Village Theater in Coronado. 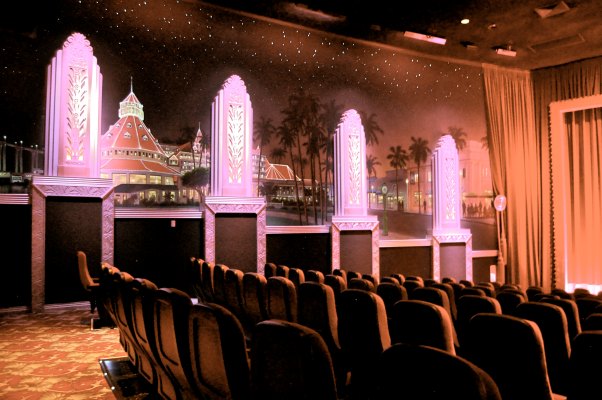 Here are a few tips to make your visit here even more delicious: