A Short Trip to New Orleans with Teens (or Tweens)

In the summer of 2011, I somehow convinced my almost 13-year old daughter to embark on a 50-day road trip in search of adventure, fun, and coming-of-age wisdom from women around the country. To get her to agree to leave her bosom buddies for an eternity, I was bound to one term—“There shall be NO learning in the summer.” I agreed…with my fingers crossed behind my back. I knew that we would both learn invaluable lessons on this trip whether we liked it or not! We launched our Retro Advice Road Trip from San Diego and cruised the highways and byways around the perimeter of the U.S.—until Day 45 in Seattle, when my girl ran out of gas.  This is the story of one of our stops — and a few good tips on how to do New Orleans with teens (or tweens).

So many things about New Orléans were HOT—the temperature, the vibe, our swamp tour guide. Despite our panting, my tween daughter and I agreed that this was definitely one of the brighter highlights of our road trip so far.

I had three rules for booking accommodations on this trip: 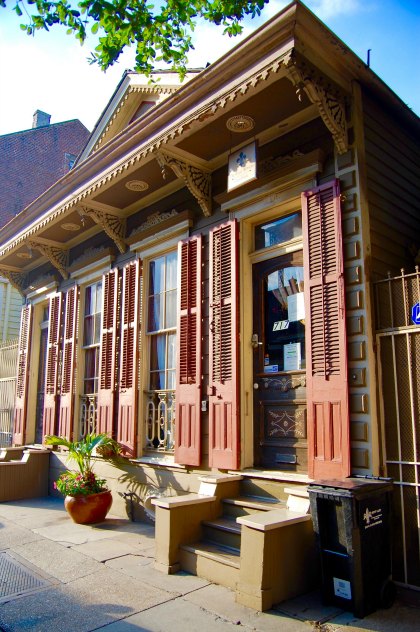 Finding just the right place to stay in the French Quarter had posed a bit of a challenge, mostly because of the limitations of my tween. After a lengthy search, I decided upon Royal Barracks Guesthouse on the quieter side of the French Quarter.

Born and raised in New Orléans, the manager (Kelly) took Southern hospitality to heart. By the time we pulled up to the front door, I had received no less than four phone calls (peppered with “sweethearts” and “dahlins’”) and she already felt like a friend of a friend.

Our room was cool—both literally and figuratively. When we (literally) burst through a pair of the probably original French doors, we were greeted by a blast of gloriously cool air. Once our eyes adjusted to the dim light, we liked what we saw—a massive bunk bed to our right, a half-barrel bathroom sink to our left, and French Quarter charm in every corner.

Kelly shared the history of the guesthouse with us.

Constructed in the 1850′s, it is what is called a “Double Shotgun House,” which was an early style of duplex with a shared central wall and all of the rooms on both sides in a row from front to back…without hallways. There’s a longstanding theory that this particular lower to middle class house style is rooted in African and Haitian culture.

The next day as I sipped beer with Kelly on the front stoop, I was informed that the place also had a ghost—a friendly “green” spirit who was known to regularly switch off all things electric. This place was an absolute treasure for just $79/night.

We hit New Orléans hard and fast. (Having learned my lesson in Austin, I preserved my sanity by planning all mother-daughter activities in the cooler morning and evening hours.) Since we only had two evenings here, we went in search of spooks shortly after we unloaded our bags.

Emily with French Quarter Phantoms enthusiastically shared the grizzly details of torture, murders, and hauntings throughout the French Quarter with our small tour group. Much to my girl’s dismay, some particularly horrific crimes occurred in a mansion a mere two blocks from our guesthouse.

The Lalaurie Mansion is considered the most haunted place in the French Quarter, thanks to the gruesome experiments that socialites Dr. Louis and Delphine Lalaurie conducted on their slaves in the mid-1800s. People were horrified then…and they’re horrified now. Especially my tween.

Okay, we are definitely only two blocks away from that haunted place. I am NOT sleeping tonight.

The next morning we left haunted mansions and tormented spirits behind and headed for lush swamps and hungry gators. 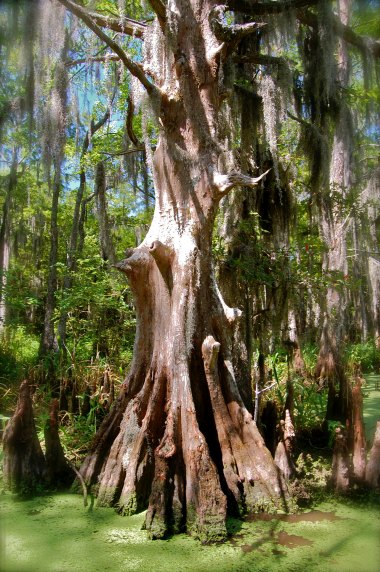 runs like a well-oiled machine. Not being one to follow the herd, I was a bit perturbed to encounter a crammed parking lot and a line out the door. This time being the last in line actually worked in our favor. We ended up being the smallest (and most hilarious) group and our guide du jour was none other than Mr. June from the 2011 Baton Rouge Fire Department calendar. The only thing that would have my my tween girl happier was a personal swamp cooler. As soon as my girl could speak again, she turned to me and rocked my mama soul…

You were just traumatized when you were younger and living in the country. These days, rednecks are smokin’ hot.

As our boat slowly made its way through the swamps, gators of all ages snacked on our marshmallows and hot dogs. The stifling temperature was the only thing that let me know we weren’t cruising through Pirates of the Caribbean back in SoCal’s Disneyland. At one point, when I looked at my girl, she appeared to be in pain.

Ma, we REALLY need a wind going through here.

Back at our room, I refused to be defeated by the oppressive heat, so while my girl “chilled” on the bunk bed, I headed out for some wandering. I managed to check off almost all my boxes…

After every ounce of moisture migrated from my interior to my exterior, I returned to the room to motivate my girl for our last outing. We couldn’t leave New Orleans without seeing some pristine southern mansions in the Garden District and check out Lafayette Cemetery.

Okay, “pristine” is definitely not the word to describe the Garden District. “Eclectic” is. Whil some of the mansions were restored, most were crumbling. Instead of manicured gardens, the landscaping was lush and wild. Reality was actually more strangely delightful than our expectations.

Our only hard core disappointment was the padlock on the cemetery gate. So, instead, we tried out some authentic sweet tea. Okay, that’s definitely an understatement. I no longer consider my sweet tooth so sweet!

My tween agreed that New Orleans was extra special…

“New Orleans is definitely a unique city…especially the French Quarter. Everything was so old and held so much history! The inn we stayed at looked very old. As my mom would say…our little room had personality. It had small French-style doors, a big bunk bed, a barrel-shaped sink, and the tiniest shower. The day we arrived we decided to go on a ghost tour of the French Quarter. It was very interesting to hear our tour guide talk about vampires, pirates, and spirits! The next morning we went on another tour…this time of a Louisiana swamp. We saw about seven or eight alligators and a nice close up of the swamp. Thank God we had a cute tour guide, because if we didn’t I would have been quite upset with my mom. It wasn’t too hot out, but the humidity got the best of me. Besides the weather, New Orleans was a beautiful city and I want to come back here some day. But, maybe in the spring…”