What to Do for One Day in Austin

In the summer of 2011, I somehow convinced my almost 13-year old daughter to embark on a 50-day road trip in search of adventure, fun, and coming-of-age wisdom from women around the country. To get her to agree to leave her bosom buddies for an eternity, I was bound to one term—“There shall be NO learning in the summer.” I agreed…with my fingers crossed behind my back. I knew that we would both learn invaluable lessons on this trip whether we liked it or not! We launched our Retro Advice Road Trip from San Diego and cruised the highways and byways around the perimeter of the U.S.—until Day 45 in Seattle, when my girl ran out of gas.  This is the story of one of our stops — one day in Austin, Texas.

It’s either the power of suggestion or things really are bigger in Texas.

On Day 4 of our 50-day Retro Advice mother daughter road trip, my pre-teen girl and I were grateful for the Texas-sized speed limit to help us get through this gigantic state. At 85 miles per hour, we were able to shave almost two hours off of Google’s 11 hour estimated drive time from Las Cruces (New Mexico) to Austin (Texas).

Mom, I think you’re going to have to retrain me to walk after this trip.

Growing up in a town with one policeman per 25 residents, my girl was flabbergasted at the lack of Highway Patrol.

Why don’t the Coronado cops fire themselves and come out here? They would have something to do.

Other than a fascinating peek into Juarez as we drove through El Paso—and several billboards warning of impending Rapture, it was a virtually sightless drive with the occasional farm.

Some people just don’t know how to farm. My Farmville farm is so much better than these. And, just so you know, Mom…we’ll be dying in Georgia on Judgment Day.

Despite the initial boredom, this was a momentous day—both of us would be experiencing a hostel for the very first time. My pre-teen’s apprehension (about numerous possibilities) was no secret. It peaked as we pulled into the dirt driveway after dark and parked in front of a spartan brick structure. As the car door slammed, her canine sense of smell kicked in.

Now why in the heck does it smell like kangaroos out here??? 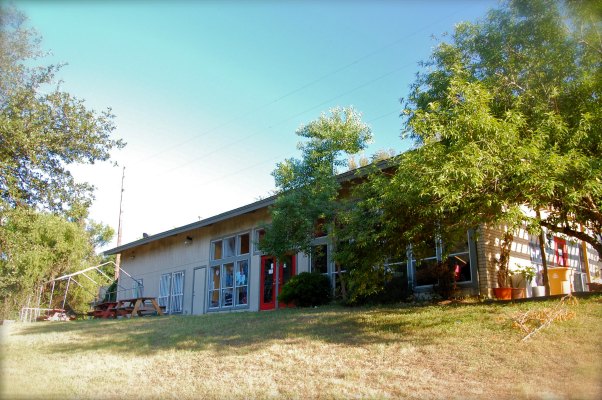 We would be staying two nights at Hostelling International-Austin. I reminded her (again) that we had a private room with a semi-private bathroom—she reminded me (again) that nothing made up for the fact that there was an excellent chance our bath-mates would be hygienically-challenged college guys.

As we tiptoed through the dorm-style room to get to the door of our private room, I became a tad worried. It was definitely reminiscent of my college days. When we shut the door, I let out my breath with relief when I saw a clean and functional room. My girl inquired as to why the bed wasn’t made.

After cooking and eating breakfast in the communal kitchen, my girl plopped herself down on the bed and informed me that she would not be coming out of the room unless we were heading for the front door. Despite significant effort over the past decade, I have been unable to tame her royal nature.

In her defense, some of “Those Outside The Door” were a bit colorful—like our two rambunctious toilet seat-challenged Australian bath-mates, the toothless gentleman who repeatedly requested help with his new iPad, the guy who cradled the house kitten while pining over unrequited love, or the man who covered his eyes, but not his stomach, as he snored loudly on the communal couch. I have a deep appreciation of all the colors of the human rainbow, but my slightly sheltered princess preferred life in black and white. She did find some peace with the fact that nearly everyone was plugged in to some form of electronic gadget. 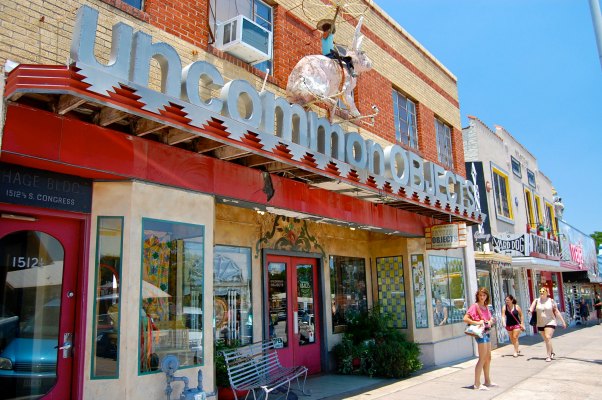 To add to my girl’s Texas-sized pre-teen angst, Austin was sweltering. She glared at me through a glimmer of sweat as I assured her that our shopping excursion on South Congress Avenue would give her plenty of respite from the heat.

Nicknamed SoCo, South Congress is lined with an eclectic mix of indie boutiques and funky thrift stores like Uncommon Objects, Allens Boots (wow), New Bohemia and, our personal favorite, Monkey See Monkey Do. Regardless of inventory, we entered every air-conditioned store. Some seriously great shopping here.

Best of all, there were food trucks here!

Austin’s food truck industry was born of a desire to combat crappy college town food without the prohibitive cost of opening a brick-and-mortar restaurant. It took off after Bon Appetit featured two trucks in an Austin travel story in 2010. Today, you can find single and double-wide trucks and trailers all around town—in parking lots, tucked in residential neighborhoods, and, of course, lining one side of South Congress. Hundreds of vendors serve up a variety of delicacies including, but far from limited to, cupcakes, BBQ, donuts, coffee and tea, and even soft-boiled duck eggs.

If it wasn’t so blasted hot, I would have tasted something from every truck in the gathering. But, I only had a little time before the Hawaiian shave ice wore off.

I’m not sure what I was thinking when I insisted on walking two blocks to snap a picture of another one of SoCo’s street art. Halfway through the second block, my princess lost it. I began to panic—we had 16 cities to go and the humidity was increasing by the minute.

How fitting that on a street in downtown Austin, this mother and daughter had a showdown. After several shots, our lines were drawn and accepted. For the next 46 days, she would be respectful and I would give her the option of remaining in the room if her inner thermometer registered triple digits.

Thank God our next excursion cooled us down. 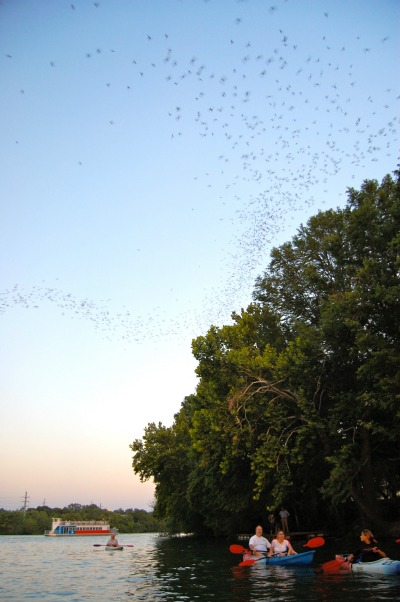 And bats we saw!

Next up was a kayak excursion with Live Love Paddle toward the bats roosting under Congress Street Bridge. I knew we were going to be okay when the sense of humor returned.

“Do I really have to wear a life jacket? Because it so doesn’t match my outfit. Seriously…bright orange and pink???”

Our aquatic adventure was the ideal blend of independence and gentle guidance. I sat back and enjoyed seeing my former leg-clinger little girl take the lead and paddle me all around Lake Austin until it was time to follow our leader to the best seat on the water. We had a show to watch—more than one million Mexican short-tailed bats launching into flight.

They were right on schedule. Our jaws dropped as we saw black ooze come from underneath the bridge and transform into a massive cloud in search of dinner.

Austin’s fiery heat is enough to break the strongest of princess wills. Back at the hostel, I watched in stunned silence as my girl grabbed her bathroom bag and towel and plodded toward the shower. When she returned, there was palpable relief on her face.

”I touched as little as possible so I won’t have fungus on my feet like Dad.”

Just 40 hours after arriving in Austin, we were repacking and heading to our next destination—New Orleans. I was quite satisfied to hear my slightly-less-royal princess utter these parting words:

I would say my first hostel experience was downright interesting, but overall a bit more basic than I prefer. I may have a tiny bit of apprehension about the impact of the next several ones I have booked. We shall see.

As we drove out of town after one day in Austin toward the French Quarter of New Orleans, my girl had this parting observation:

Even the (finger)nails are bigger in Texas.

If were staying longer, we’d definitely have hit the water on some paddleboards. Not only is it a beautiful place to be, but it’s the perfect place to see Austin and keep cool during the hot summer temps! But, alas, we only had one day in Austin—our next stop was beckoning.

(For those of you who do have the time, here are some awesome places to go courtesy of Gili Sports—The 11 Best Places for Paddle Boarding in Austin, Texas)

“Austin was not what I expected at all. I thought it was going to be a redneck town, not a large city. But Texas proved me wrong. The hostel we stayed in wasn’t exactly what I had in mind. First, to get to our room we had to walk though a room with two sets of bunk beds. Second, there are some strange people that stay in hostels…one guest was having a conversation with a cat! Even though the hostel had air conditioning, I think I would have been more comfortable in a tent.

The day after we arrived, my mom wanted to go check out Congress Street. We went in and out of stores so we would cool off every once and a while. When there were no more stores to go into, I began to slowly melt…and, the heat can (and did) bring out my ugly side. We didn’t stay for much longer.

The next thing on our to-do list was to paddle a kayak in a lake to watch bats fly out from underneath a bridge. This was my kind of tour…we weren’t instructed very much and being out on the water at dusk cooled me down. After about 45 minutes paddling around, the bats started to swarm out by the thousands. It took about 30 to 45 minutes for each and every bat to come out from under that bridge. This was definitely the highlight of the trip so far! But, its only been five days and I hope there are more adventures to come.”

Photos from One Day in Austin
Full Screen Slide Show