In the summer of 2011, I somehow convinced my almost 13-year old daughter to embark on a 50-day road trip in search of adventure, fun, and coming-of-age wisdom from women around the country. To get her to agree to leave her bosom buddies for an eternity, I was bound to one term—“There shall be NO learning in the summer.” I agreed…with my fingers crossed behind my back. I knew that we would both learn invaluable lessons on this trip whether we liked it or not! We launched our Retro Advice Road Trip from San Diego and cruised the highways and byways around the perimeter of the U.S.—until Day 45 in Seattle, when my girl ran out of gas.  This is the story of one of our stops—for two days in Savannah, Georgia.

Savannah takes sweltering to a whole new level, refusing to let up on the oppressive heat and humidity until long after the sun sets. My strategy of scheduling all mother-daughter activities after 5 p.m. wasn’t so effective here.

After the first evening, my girl staged a full scale sit-down from which she rarely stood up. Although she only had a small peek at Savannah, she somehow saw enough to agree with my conclusion that it was a favorite. That didn’t stop her from thinking I was senile when I said I wouldn’t mind living here some day.

Similar to New Orleans, Savannah challenged me in my quest to find just the right affordable independent (AKA non-chain) and unique accommodations. Emphasis on affordable. I had no problem finding independent and unique, but even in the midst of their muggy summer, Savannah innkeepers refuse to cut a deal.

After an exhaustive search, the closest friend to my wallet was Planters Inn, a 200 year old 60-room boutique hotel on Reynold’s Square. It had charm, location, and a twin room that was perfect for this mom and daughter. My girl was thrilled…

Sophie is at peace now.

…until the second day, when she found out it was haunted. Her story of knocks on the door and an empty hallway almost had me believing.

On our first evening, I managed to get my girl to emerge from our (haunted) hotel room several hours before our 10:30 p.m. appointment at a haunted house. I really wanted to walk along the riverfront. 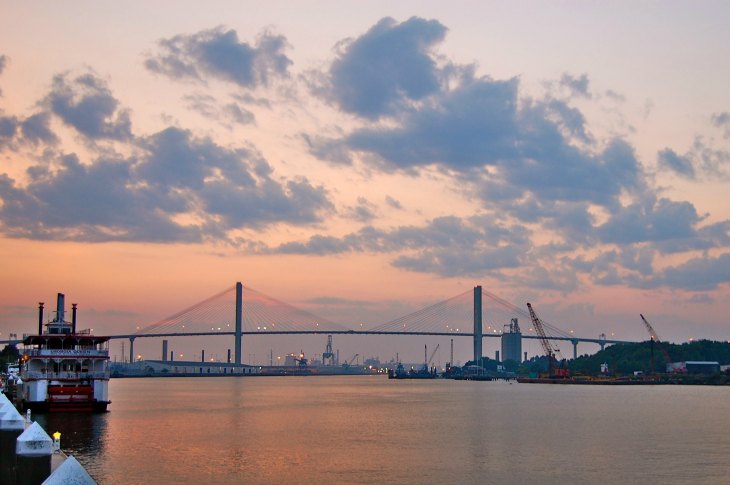 It didn’t matter what kind of shops we passed, I pulled her in in the hopes of diverting her attention from the sheen that was forming on her face. The sunset, accented by a riverboat and a bridge, was a tremendous help. And, so was a delicious (and healthy) dinner of chicken lime tacos at Kayak Cafe.

Both of us were both excited and a little apprehensive about our late night date with the paranormal.

The antebellum Sorrel Weed House was the subject of an episode of one of my girl’s favorite TV shows—the Sci Fi channel’s Ghost Hunters. I was really hoping our $30 tickets bought us a sighting!

Built in 1839, for Francis Sorrel, this house was once the place for Savannah’s elite to be seen. After Generals Sherman and Lee were entertained here, the house was purchased by Henry Davis Reed, the man responsible for the present day entertainment.

Upon seeing Henry in the arms of one of their slaves, his distraught wife threw herself off the balcony and died in the courtyard below. A short while later, the slave was found hanging from the rafters of the slave quarters in the carriage house.

As we sat on the edge of the best seat in the house (in front of the air conditioner) listening to the tragic tale, I couldn’t resist. My finger seemed to have a mind of its own as it went in search of motherly retribution on the back of my girl’s head. A gentle tweak was all it took.

Almost paralyzed, her massive eyes and right hand sought me out.

I confessed immediately with snorts and giggles. She melted—this time from overwhelming relief—and, together, we lost all control.

At breakfast the next morning, my overheated princess reminded me that any thought I had of her joining me on my pedestrian wander throughout Savannah’s historical district was pure fantasy. Huh, heat trumps ghosts. Good to know. 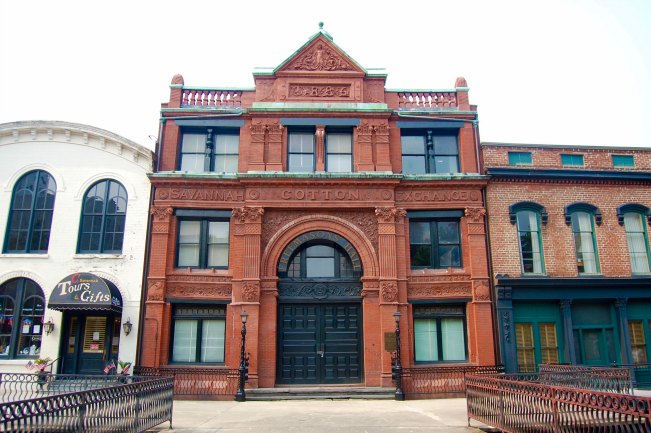 I, however, refused to surrender…completely. After stripping down to the locally acceptable bare minimum of clothing, I approached the hotel concierge and, with a small amount of shame, purchased one adult ticket to the Old Savannah Trolley Tour.

Over the next three hours, I exercised my hop on/hop off privileges a total of five times, most of the time to stop the voices—not the ones inside my head, but those of five tour guides trained in the art of torturing educated people.

The highlight of my day happened inside a store. Rarely do I get excited about anything retail, but I have to take a moment to share my sublime experience in one of Savannah’s best stores.

I almost walked by Savannah Bee Company, but something caught my eye. “Honey Sweet Tea”…hmmm. I kept walking, then reconsidered and backtracked (no painless feat during a Savannah summer). A small air-conditioned peek and then I’d continue marveling at mossy trees.

Almost immediately upon walking in, I was encouraged to do some honey tasting. I agreed out of politeness, not from any sense that I’d be able to delineate one honey from another. I was offered five different varieties—Tupelo, Sourwood, Black Sage, Orange Blossom, and the Winter White.

WOW…let’s just say that Savannah Bee Company has fulfilled their mission to “Redefine honey.” The days of me thinking that all honeys are created equal are done and gone. I happily traded a small piece of my wallet for some of that liquid gold known as Winter White.

I was a bit concerned about my girl overdosing on Farmville, so I staged an intervention. Tea was my lure.

Tea is something special that she (and her 16 year old brother) and I share, so I was optimistic that lunch and a pot of tea at The Tea Room. It worked.

The threat of heat stroke outweighed the torture of bad jokes. I hopped on and off several more times to: 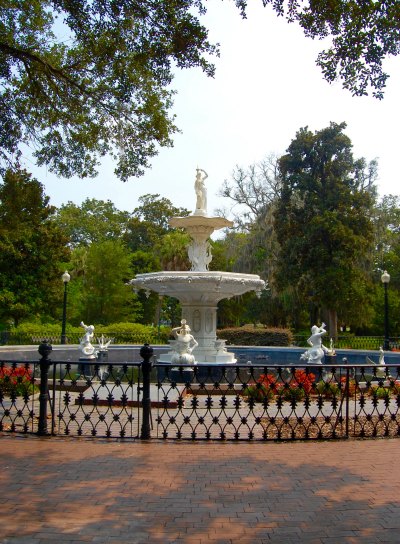 Even I was eventually forced back to the air conditioned hotel room for a cool down before venturing out again.

I am drawn to the buried stories and dignified natural beauty of old cemeteries, so before we merged onto the highway toward Nashville, I went in search of Bonaventure Cemetery on the outskirts of town.

If not for my impatient tween, I could easily have spent hours here reading moss covered headstones, snapping photos, and just gazing at the breathtaking scenery.

Here’s my girl’s version of our two days in Savannah:

On our way from New Orleans to Savannah, the weather didn’t change much but the architecture did…from barely standing, old and rickety homes to cleaner brick ones…all filled with history. The inns we stayed at in both places just happened to have ghosts in them. Wonderful.

When we arrived at our hotel in Savannah, we walked into a cute little room with two twin sized beds and a broken TV. Even with the broken TV, this was the nicest place we have stayed in so far.

The same day we arrived, we took a walk down by the river and then headed over to yet another ghost tour. But this one was different. First, my mother intended to scare the life out of me by lightly scratching the back of my head. Now I watch a lot of television shows and movies about ghosts, so my instant thought was that a ghost had it out for me. After about ten excruciating seconds of thinking a ghost was coming to take my soul, I turned to my mom and whispered, “Mom, something just touched my head. Mom, seriously, something just like scratched my head. MOM.” Right before I was about to shed tears, she decided to inform me that it was her the whole time. I could finally move again and my overactive sweat glands decided to calm down. Even though I was relieved, I began planning how to get even with her.

The rest of the tour was just as terrifying, so I was suction-cupped to my mom’s hip. It eventually ended at around midnight and I was released from this terrifying haunted house. We walked back to the room and somehow I feel asleep right as I hit the bed.

The next day was just as sweltering hot as the day before. I managed to get myself ready to go to a tea house, but that was about as much as I could stand. For the rest of the day while my mother was out sweating her skin off, I happily sat in the room improving my Farmville farm and Cityville city.

She came back about two or three hours later to inform me that I had to go on a walk by the river and to dinner. After we walked into the Pirate’s House, we walked back out and decided to get pizza to go. I sent my mom for it and returned to find peace in the air conditioned room.

Before I knew it, our two days in Savannah were over—it felt like seconds.