Skip to content
PENNSYLVANIA: Two Days in Philadelphia with a Tween

In the summer of 2011, I somehow convinced my almost 13-year old daughter to embark on a 50-day road trip in search of adventure, fun, and coming-of-age wisdom from women around the country. To get her to agree to leave her bosom buddies for an eternity, I was bound to one term—“There shall be NO learning in the summer.” I agreed…with my fingers crossed behind my back. I knew that we would both learn invaluable lessons on this trip whether we liked it or not! We launched our Retro Advice Road Trip from San Diego and cruised the highways and byways around the perimeter of the U.S.—until Day 45 in Seattle, when my girl ran out of gas. This is the story of one of our stops — two days in Philadelphia, Pennsylvania.

Our conversations are running deep on this mother-daughter road trip. On the way from Virginia Beach to Philadelphia, my tween proclaimed:

“Grandmas are so cute…I love it when they’re big and squishy and you can sit on them like a bean bag.”

I never expected to laugh quite so much this summer—the giggles started in Las Cruces, New Mexico, and haven’t stopped yet.

GPS had us exit the interstate onto some crazy hectic inner city streets. Even being guided by a virtually infallible navigator, we managed to get a tad turned around. I was legitimately shocked when we found the tiny alley that hid our temporary home for the next three nights. 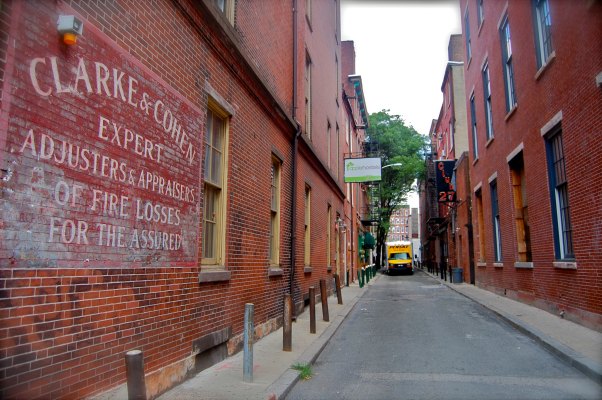 Once again, we would be staying at another Hostelling International hostel during our two days in Philadelphia. Apple Hostel was housed in a historical brownstone on Bank Street in the Olde City, just steps from more than enough sights to fill our next two days. (Thank God, because I had no intention of driving again until the day we re-merged onto the interstate.)

The lower level had bright and apple-y décor, a meticulously clean (and well stocked) kitchen, and outstanding common areas. It pretty much oozed happy.

My tween was leery. Despite my hopes, she had yet to warm up to hostels. I have no doubt she will when SHE is footing the travel bill!

Fortunately, this evening’s activity—a Katy Perry concert (on her California Dreams Tour) in honor of my soon-to-be-no-longer-a-tween’s thirteenth birthday—was a major distraction (for now).

While checking in, I discovered that while Apple Hostel was definitely expecting me, they were NOT expecting my tween. This was the first I had heard of their “No Children” policy. My mind raced—where would we sleep, would we be late to (OR MISS) the concert, and why didn’t they allow children??? I squelched my panic, smiled hopefully, and explained our situation nicely to the girl behind the counter. I wanted to jump over the counter and bear hug her when she opted to make an exception to the rule.

As is often the case with things bursting with historical charm, you give up some modern conveniences. In this case, this was large rooms, elevators and air conditioning. Our tiny private room was on the fourth floor of a four-story building that was only reached by a narrow, and stifling hot, stairwell. Three round trips later and we were dripping and irritated.

And, then the extra large double scoop of Baskin Robbins mint chocolate chip ice cream hit my lactose intolerant girl. She spent the next hour losing her pride in the communal bathroom. Katy Perry was looking like she would have to perform without us until 10 minutes before we had to leave. Sheer determination had my girl brushing her teeth and announcing that she was ready to go.

Getting to the concert couldn’t have been much easier. The subway, which was crammed full of giddy 10 to 16 year old girls (and many secretly giddy moms) on this particular night, dropped us off on the edge of the Wells Fargo Center parking lot. We arrived at our seats in just minutes.

The concert was a hit! If this anti-pop mom is being totally honest, I might have had a giddy moment myself.

When we ascended the subway stairs back into the Olde City, it looked quite a bit different than when we left. The once a bustling historical neighborhood was now a jam-packed nightlife scene. I hadn’t noticed the nightclub across the alley when we had arrived. The pulsing bass ended up being somewhat soothing—the brawl out front was anything but. One 911 call and several “I told you so’s!” later and we hit our pillows hard. Sleep came just after I comprehended the “No children” rule and the rest of our hostel time was pleasantly uneventful.

Before she went unconscious, my tween reminded me of our NO LEARNING agreement. I had little choice, but to make this deal in order to get her to agree to being stuck in a Mini Cooper with me for 50 days. My dastardly plan was to hide her enlightenment in subtly educational activities, but there was nothing subtle about Philadelphia’s educational potential.

Fortunately, between the Olde City and the waterfront, I had no problem filling our two days with tween-friendly activities.

Our mutual favorite was Elfreth’s Alley, our nation’s oldest residential street. Back in the early 1700’s, it was home to an eclectic mix of artisans and craftsmen. Today, it’s overflowing with charm and interesting history. Definitely a place to take some photos! 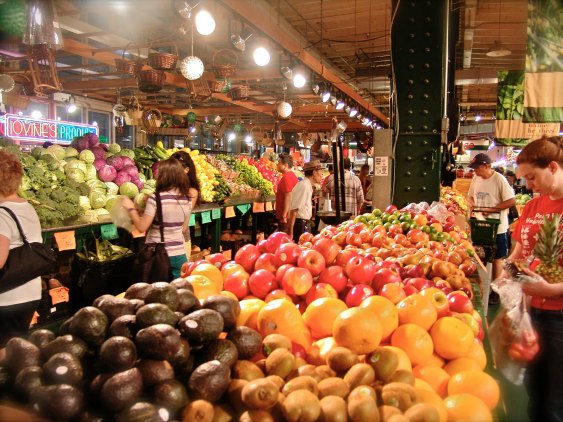 A local friend steered us toward another highlight of our visit—Reading Terminal Market. This historic public market in the city center is crammed with specialty food vendors. I don’t think our mouths stopped watering the entire time we wandered the aisles. It was not an easy decision, but we finally settled on Profi’s Creperie. We didn’t regret it.

People watching amused us both as we went from spot to spot. As soon as an elderly man in florescent spandex pants was out of earshot, my girl turned to me and calmly concluded:

“Well, THAT should be illegal.”

I could not spend two days in Philadelphia’s Olde City without a quick (torturous) stroll through Independence National Historical Park. I wasn’t missing much—just the places where the Constitution was debated, signed and read publicly for the first time, only Ben Franklin’s home and final resting place, merely the Liberty Bell. I love my daughter, I love my daughter, I love my daughter—the same one who pulled on my arm the entire time to get me back to the room so she could harvest her Farmville crops. Sigh.

We celebrated my girl’s 13th with grilled corn and designer cupcakes at Penn’s Landing. This simple celebration was just fine by her…she still had Katie Perry swirling through her head.

On our second, and last evening, I rekindled an old high school friendship over tapas at Amada. This was the icing on the cake of our two days in Philadelphia. And, I have to say, this city far exceeded my expectations.

My girl arrived a tween and left a teen after two days in Philadelphia. Here’s her take on the city…

“In the car on the way to Philadelphia, I could barely sit still. Excitement was stirring inside me. Who could sit still knowing that within hours you will be at a Katy Perry Concert??? At the end of the endless car ride, we carried our luggage up the four-story building without an elevator. Minutes after all the luggage was carried up the stairs, I started to feel sick. I was pretty sure I was going to throw up…and, sure enough, I did. It was like someone put a fire hose on high pressure. I kept wondering what could be wrong…then my mom and I came to a conclusion. My lactose intolerant body could not handle the two scoops of ice cream I ate a few hours earlier. Thankfully, I had my last blow just minutes before the concert. So being as careful as possible, we headed off to the concert…the highlight of my trip. Katy definitely puts on quite a show!

The next day all my sickness was over and I could hear again. First, we walked on the oldest residential street in the nation. It was pretty cool…and, I’m not usually one to like this type of thing. After we were done there, we took a long walk down to a cute little market where we had a delicious lunch and crepes. The next day was pretty relaxed. I gave my mom a hard time about all the historical stuff, but it was definitely an enjoyable stay.”